"I almost fell off my chair!"

Someone living in the Highlands of Scotland spotted two sets of tiny eyes peering out of the forest recently.

Upon closer inspection, he saw two tiny kittens in the underbrush — and they were all alone.

But these weren't just any normal stray or feral cats — they were actually some of the rarest animals in the world. The eyewitness snapped some photos and sent them to a local organization that tracks a very specific kind of cat.

“I almost fell off my chair when I saw the photos,” Paul O’Donoghue, chief scientific advisor for Wildcat Haven, a conservation organization in Roybridge, said in a statement. “The markings looked amazing."

People in the area are actually used to reporting any cat they see who has markings like a tabby cat's. Many residents realize that they're sharing the land with the Scottish wildcat, a subspecies of the European wildcat, and one of the rarest wild felines in the world — there are just about 35 of them left on Earth.

Wildcat Haven tries to spread the word that if people see any feline resembling a Scottish wildcat, they should take some photos to document the sighting. Wildcat Haven's mission is to help save this rare species, which has become endangered because of hunting and habitat loss, as well as cross-breeding with domestic cats.

Wildcat Haven also reminds people to not meddle with the kittens — mother cats often go hunting, leaving their kittens in a safe place while they're out. But this case was different: These two kittens seemed like they needed help.

After the original sighting, people kept a watch on the kittens to see if the mom was coming back. After 24 hours, no mother arrived and the kittens had started to stray closer and closer to a road.

"It seemed likely they had been abandoned or orphaned and were in grave danger," O'Donoghue said.

That's when rescuers decided they needed to do something. They managed to capture the kittens while a wildlife filmmaker, Steve Piper, set out remote cameras to make sure their mother wasn't looking for them.

“[We] had the two weak and timid kittens safe with some bedding and food," Piper said in a statement. “By next morning after some food and water the timid kittens had transformed entirely and we had two spitting balls of fury in their place. They were little mini wildcats stamping, hissing and growling, displaying all the explosive aggression typical of the species."

Their mom was never found. "Nothing on the cameras, no tracks, no eyeshine or calling in the night," Piper said. "Perhaps she was run over, perhaps snared; sadly there are a lot of threats out there for wildcats. These two orphans were incredibly lucky to be found in time.”

The kittens were moved into a large forest enclosure at a sanctuary run by a conservation group, Highland Titles, complete with a natural stream, where they will be able to grow up safely. And it's very important that they do — the two pure Scottish wildcats represent 6 percent of the total population of their subspecies and, therefore, are a symbol of hope for the future of this special kind of cat. 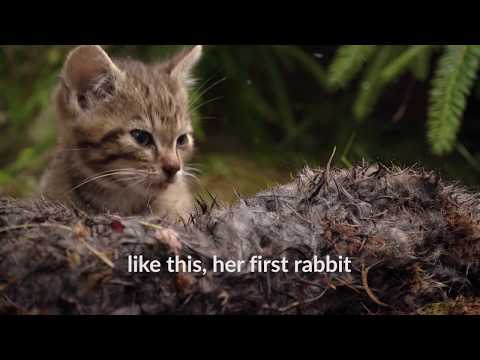 The enclosure for the wildcats was set up because conservationists had realized that orphaned Scottish wildcats so often ended up getting raised in zoos and never returned to the wild. "[That] just seemed wrong to me," Peter Bevis, founder of Highland Titles, said in a statement. "I thought we could fence off some of our forest and that would be a good place for an injured wildcat to recover before being released back into the wild. I never expected that we’d have two orphaned wildcat kittens coming to stay!”

A veterinarian from Wildcat Haven has set up camp near the orphans' new home so he can watch over them while they settle in.

"I am overjoyed," O'Donoghue said. “Once these kittens are old enough they will be released at the first opportunity. The purest wildcats are in the wild ... and it’s where they belong."

You can help wildcats like these kittens by making a donation to Wildcat Haven.