Guy Comes Into Kitchen And Finds Someone Strange Eating His Pasta

Making fresh pasta from scratch isn't an easy task, but a man in Brisbane, Australia, had already managed the culinary challenge — when he encountered another rather unexpected difficulty.

Jordan Cahill had wandered out of his kitchen for just a few moments, and when he returned he found an uninvited dinner guest who had seated himself at the counter.

The guest was a wild possum.

The possum was particularly interested in the night's entree — or at least the remnants remaining in the bowl where the fresh pasta had been mixed.

And just because the possum was a wild animal didn't mean he had no sense of decorum — the little guy used a utensil to sneakily steal a few tastes.

"My initial reaction was, 'Oh my God, he's using a spoon!' followed by quickly grabbing my camera for evidence," Cahill told The Dodo.

"Thankfully we had already made the pasta and he was just finishing off the scraps," Cahill said.

As Cahill filmed the possum, he couldn't stop laughing. Finally he gently suggested that the little guy put down the spoon and be on his way. 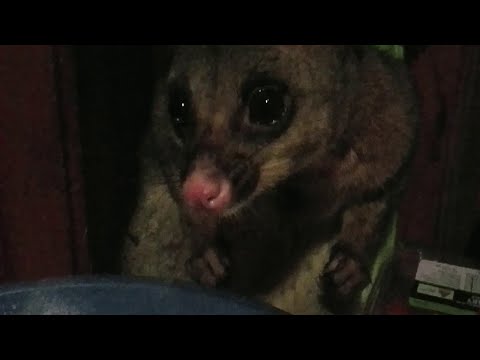 This wasn't the first time the possum showed up for a snack.

"We've found him in the kitchen a few times taking fruit out of the bowl," Cahill said. "He even came into the kitchen once during a dinner party!"