Scientist Shocked To Discover A New Species Of GIANT Fish

"It was one of the most amazing moments in my life.”

When Marianne Nyegaard was about 6 years old, her mom took her to a local natural history museum in Denmark, where she's from.

"They had a sunfish on the wall and I remember standing in front of it and wondering, ‘What on earth is THAT?!’” Nyegaard told The Dodo. Years later, Nyegaard would not only be devoting her life to studying this special type of giant fish — she’d be discovering a species no one knew about.

"I was so lucky to be able to set up a PhD project on sunfishes off the island of Bali in Indonesia, and expand it to include sunfishes around Australia and New Zealand as well,” Nyegaard said. "And once you start working with these crazy fish, it very quickly becomes a very fun obsession."

What does such an obsession look like? It’s a lot of analyzing DNA sequences of fish. "When I analyzed sequences from sunfish caught in Australia and New Zealand, I ended up with an unknown clade [a group of DNA sequences] which did not correspond with any known species,” she said. "A Japanese research group had obtained a single sample from an Australian sunfish 10 years ago, noting it did not fall into any known clade or species. This single sequence nested in my ‘unknown' clade, and the hunt was on!”

Nyegaard found only one photograph of the fish she thought was a new species of sunfish. “I hunted around for this mystery fish for some time,” she said, "wondering how on earth one goes about finding something big, elusive and unknown with literally no budget to spend.”

But Nyegaard had a stroke of luck. She was told about three large sunfish stranded on a beach in New Zealand. But a storm delayed her travel and by the time she got there, the fish had washed back out to sea. But she had the photographs and samples from a local who went out to record the fish for her.

"Ten days later, incredibly, as if the fish just really wanted to be found, the ocean delivered a fourth specimen at the same beach, and this time I flew down,” Nyegaard remembered.

"I arrived in the dark and a kind local drove me down to the beach and shone the headlights on the fish. I got out and just stood there, under the stars with the ocean rolling in and the huge fish just lying there on the beach, a stranded, lost behemoth, both sad and lonely looking but also beautiful in the weirdest way," she said. "I could see straight away this was the mystery fish. It was so different than the other two species, and it was one of the most amazing moments in my life.”

Later, the science agreed with the moment of awe — this was in fact a species no one had ever known about before. Since then, Nyegaard has published her findings in the Zoological Journal of the Linnean Society. But she still remembers that night perfectly. “That first moment was certainly one of sheer wonder — how could we miss this massive fish?” 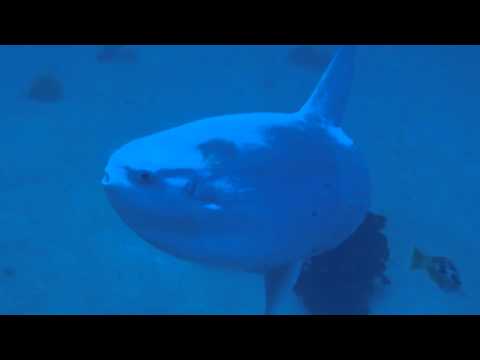 Now that she’s discovered this new species, which she’s named the hoodwinker sunfish, she’s determined to protect the fish that has fascinated her since she was a child.

"It greatly saddens me to see the rising impact we humans have,” Nyegaard said. "This species, along with the other sunfishes, are great ambassadors for the oceans and all that live in them."

You can help protect this special sunfish and all the other ocean animals by reducing your impact on climate change.