Something like a real-life fable was recently caught on hidden camera in the wilderness of Australia.

A group of students from the University of Melbourne hoped to capture some images of a wild wombat by using a special wildlife camera, which is triggered by motion sensors to start recording.

When they were inspecting the footage, at first the students saw who they expected to see: a wombat peeking out of his little burrow.

But then someone else showed up on the footage.

A wild koala emerged from the nest, too.

And that wasn't the end of the special appearances.

A wild rabbit then showed up, poking around the burrow.

There seemed to be something especially appealing to these wild individuals about the burrow the wombat had built.

But wombats tend to be loners — so it's unlikely that he had welcomed the other creatures in his nest as guests. In fact, wombats tend to build several different burrows which they move between.

“Wombats can be a bit cantankerous," Kath Handasyde, an expert in mammal ecology and physiology, said. Handasyde believes that the wombat was probably asleep when the curious koala came sniffing around. "If the koala had encountered the wombat, it would probably have been chased out and wouldn’t have been anywhere near as relaxed as we can see in the photos." 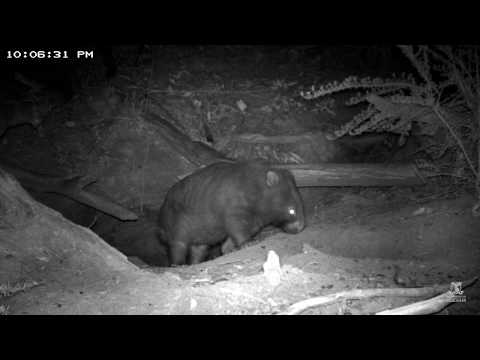 Meanwhile, the rabbit, which is an invasive species in Australia, was probably using the wombat's vacant nest for extra protection when no one else was around.

Even if the three creatures didn't snuggle up together and spark an interspecies friendship, there's still something a bit heartwarming about the creatures, despite their differences, all finding comfort in the same cozy home. And it's so fortunate that we got a glimpse into their world.

"Camera traps are amazing tools that allow us to peek into the lives of shy nocturnal marsupials," Handasyde added. "Sometimes they reveal things we never dreamed would happen.”