Incredible Bird Can Make Himself Look JUST Like A Tree Branch

Often called a real-life Muppet or a cartoon bird, the great potoo is a truly unique creature.

With their large mouths and bulging yellow eyes, it’s hard to believe these birds could ever blend in, but if you travel to the forests of Central and South America, you will need a keen eye to find one among the trees.

It’s not that these strange birds are rare or endangered, they’re just nearly impossible to spot thanks to their feather camouflage — a mottle of gray and brown, which perfectly resembles tree bark.

The potoo takes advantage of its cryptic coloring to hunt in the laziest way possible. The large bird plops on a tree branch, squinting his eyes, turning them into nearly invisible slits. He then fluffs his head feathers so that they stand on end, thus transforming himself into a “broken-off stub” of the branch.

And his disguise is pretty convincing.

The potoo will sit, unmoving, on his tree perch and wait for prey to fly by, quickly snatching large insects, such as moths, beetles and grasshoppers, out of the air with his enormous mouth. The carnivorous bird will occasionally feast on small bats, and even other birds, when the opportunity arises.

Yet the great potoo still manages to be scarily cute.

He even has a pretty robust fan base on social media, and his likeness has inspired some adoring fan art.

If you want to find potoo birds, they are best distinguished by their haunting calls. Some say it sounds like the roar of a tiger, the croak of a frog or the gruff, wrenching scream of a human. Or a combination of all the above. 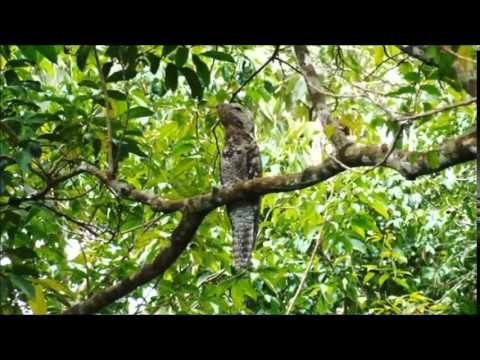 If you’re looking for a spirit animal, this expressive bird could be it ...