Tiny Baby Vulture Is Growing Up With Two Dads

"They always build a nest together, bond and mate together."

Two male griffon vultures at the Artis Amsterdam Royal Zoo in the Netherlands have just welcomed a tiny baby chick into their family.

The gay couple, who took turns lying on the egg until it finally hatched last month, has been together for years. "They always build a nest together, bond and mate together," zookeeper Job van Tol told the BBC.

When zookeepers first found the abandoned egg, they put it in an incubator while they looked for the perfect couple to adopt it.

But no other vulture couples seemed interested in saving the life inside the little egg.

"It was a bit of risk as we had no guarantees of success, but we thought, finally, this is their chance," Van Tol said.

And the couple didn't miss a chance at this special opportunity. Their chick, who is now 20 days old, is being fed and tenderly cared for by the two dads.

This isn't the first time an animal has displayed homosexual behavior. It is actually prevalent in many types of birds, including penguins, as well as many other species.

"As in some penguin species, vultures do everything the same, they alternate all the jobs," Van Tol said. "Females lay the eggs, but they breed together, they forage for food together. Males are programmed to have that duty of care." 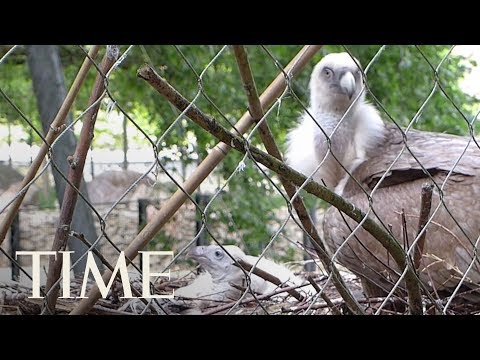 The zoo hopes to release the chick into the wild once he's older. But until then, he has a lot of growing up to do — and his dads aren't ready for him to leave the nest just yet.