Such an incredible moment ❤️️

To Loijuk the elephant, nothing is more important than family — especially now that she is starting one of her own.

In 2006, the orphaned elephant was found all alone at only 5 months old, and was rescued by the Sheldrick Wildlife Trust (SWT) in Kenya. She was hand-raised by SWT until she was old enough to return to the wild.

Years have passed, but Loijuk still has a close bond with her human family. She returns to the grounds of the sanctuary every month to visit. But in September, Loijuk surprised her former caretakers with a newborn elephant calf in tow.

It was clear the proud elephant mom couldn’t wait to show off her baby. The calf, who has since been named Lili, was only hours old — likely born only the night before.

Loijuk has never forgotten the kindness of those who helped her. She even invited Benjamin Kyalo, the head keeper, to have a special moment with her newborn calf.

“Benjamin was able to get close to Lili (who nestled into his legs), stroke her delicate newborn skin and breathe into her trunk, thereby letting her know who he was via his scent,” Rob Brandford, executive director of SWT, told The Dodo. “Elephants have an incredible memory and sense of smell and our keepers will often breathe into the orphans’ trunks so they can recognize who they are.”

You can watch a video of Loijuk and Lili's touching visit here: 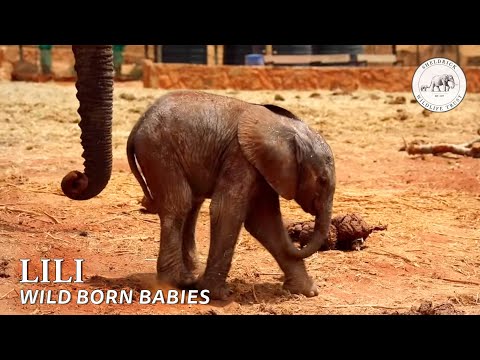 Lili was quite wobbly on her feet during the meeting, but over the course of the week, Kyalo watched as she got stronger and stronger.

"Loijuk has stayed close to the area around the unit, allowing our keepers to watch over her and check how she’s getting on," Brandford said. "Considering September is the peak of the dry season in Tsavo, not the most favorable of conditions for a new baby, we are delighted that Loijuk has returned close to home so that we can help supplement her diet when she visits."

In the wild, calves are raised with the help of female relatives within the herd. Loijuk has played nanny to other babies before giving birth to Lili, and now her calf has nannies of her very own — two other wild orphans named Naserian and Ithumbah.

Lili will remain with her mom's herd in the wild for life, and if she is ever in need, she now knows there is a safe place she can always return to.

Lili is the 31st calf born to female orphaned elephants raised by SWT now living wild, and she is a beacon of hope for threatened elephant populations everywhere.

“Moments like these are momentous,” Brandford said. “In saving one orphaned elephant’s life, we are not only seeing that orphan thrive but start a family.”

"Lili has a brighter future ahead of her than many elephants," Brandford added, "and we look forward to watching this little girl grow up in the wild.”

To support orphaned elephants being cared for by the Sheldrick Wildlife Trust, you can make a donation.