"There’s no sibling rivalry. The eaglets are kind of nice to it. It’s unbelievable."

A family of wild bald eagles in Canada has welcomed an unlikely newcomer into its fold — a baby hawk who, quite remarkably, appears to be thriving under their care.

The young red-tailed hawk was first spotted in May, cozied up in the eagles' nest along with their eagle babies. Despite being visibly different from the others, the eagle parents appear to regard the hawk as their own, making sure he has his share of food carried back to the nest.

How did this arrangement come to be? Researcher David Hancock, from the Hancock Wildlife Foundation, has been keeping a close eye on this family. This is his best theory.

"I think the hawk was picked up by the eagles as potential food and brought back to the nest," Hancock told The Dodo. "That’s not an unheard-of event."

But rather than tear the little hawk apart, the eagle parents apparently had a change of perspective.

"It’s a great biologically rooted question. If an eagle has two of her own babies in the nest, why does she not feed one to the other? Obviously, there’s some mechanism there that prevents it," said Hancock. "It could be that the baby hawk is similar enough in appearance, or it made a begging sound that triggered the nurture response. It’s an interesting concept."

Whatever the case, Hancock calls it a "lucky break" for the hawk. (And the little guy certainly isn't protesting.) 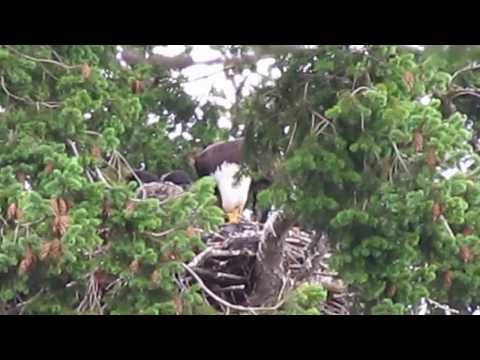 What makes the situation even more impressive is that the baby eagles don't seem to mind having to share the nest, or their food, with the feathered outsider. In fact, it's almost as if they're glad he's there.

"The hawk is not being browbeaten. There’s no sibling rivalry. The eaglets are kind of nice to it," said Hancock. "It’s unbelievable!"

Baby red-tailed hawks leave their parents' nest sooner than baby bald eagles do, and if all goes well, this adoptee will soon strike out on his own.

The baby hawk will fledge in about a week. But since fledgling hawks normally need lots of help from their parents at first (whereas fledging bald eagle require less), his future is a little uncertain. Hancock plans to be there when the hawk tumbles to the ground after the first attempt at flight, so he can take him to a facility where he'll learn the skills he needs to survive.