They had a blast!

Mike Morgan was watching his rescue dog Zuzu running around their backyard when he suddenly noticed she was fascinated by something on the other side of their fence — and quickly realized it was a deer.

Zuzu was insanely shy and fearful when she was first adopted, but with the help of trainers and her family she's finally come out of her shell, and so it was fun for her dad to see her being so brave and inquisitive with the neighborhood deer.

The pair were sniffing each other, trying to figure each other out, and Morgan assumed that would be the extent of it — until suddenly the curious deer hopped over the fence and ran right over to Zuzu. Morgan wasn’t sure how Zuzu would react at first, but as soon as the excitable dog realized she had a new playmate, she was absolutely elated and started running all over the place, trying to get the deer to chase her.

"Zuzu reacted almost like the deer was another dog," Morgan told The Dodo. "Just playing and stuff."

The deer seemed a little unsure of Zuzu at first, likely never having played with a dog before …

… but was soon cautiously running around a bit too, feeling out the situation.

Of course, the deer was a wild animal, and Morgan knew it probably wasn’t safe for the pair to be playing together. He tried calling Zuzu back into the house multiple times …

… but she was just too excited to listen right away.

Finally, the deer seemed to have had enough and started to meander away — but Zuzu was still hoping her new playmate would stick around a little longer, and continued to run around the yard in excitement.

Eventually, the unusual visitor was gone and neither the deer nor Zuzu had been harmed at all. In fact, they seemed to have a mutual respect for each other as they ran around the yard together — and the next day, the deer came back to try and visit Zuzu again.

"We saw the deer again a day later and she walked with me and Zuzu for about a block," Morgan said.

It seems that the formerly shy Zuzu is now very good at making friends, with literally any kind of creature who comes her way!

Check out the full video of this adorable encounter below: 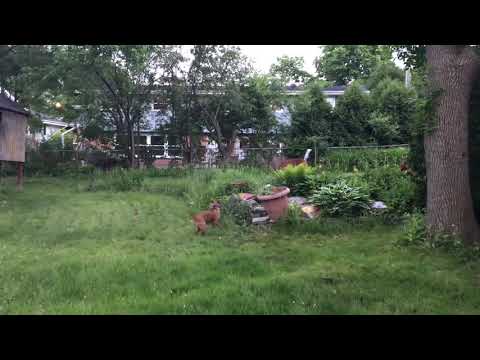