When a 5-year-old bear named Luna decides to do something, she does it with her whole heart and mind.

In the hot summer months, for example, at Bear Sanctuary Muritz, her home in Germany which is run by Four Paws International, Luna fully immerses herself — literally and figuratively — in the cooling activity of swimming.

It's no wonder Luna is so apt to enjoy herself. Luna spent her cub years, until age 3, with very few pleasures.

"Luna lived a horrible life at the amusement park in southern Albania for about three years, before we could rescue her in 2016," Jeta Lepaja, spokesperson for Four Paws' sanctuaries, told The Dodo.

Luna was likely stolen from the wild when she was just a cub after her mother was killed by poachers.

"Usually poachers take them when they are tiny cubs," Lepaja said. "Afterwards, [they] sell them to people who own a business, like in this case an amusement park." 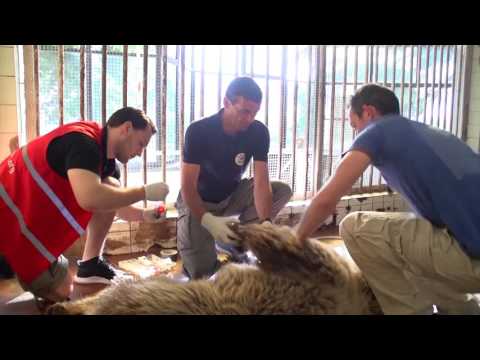 Ever since her rescue, rather than being the forced source of entertainment for people, Luna has the freedom to entertain herself.

Just recently, almost as soon as a chill came into the air, Luna knew exactly what she needed to do. And she did it super fast. And also twice.

The chill meant that winter, and therefore hibernation, was right around the corner.

Luna needed to make a den. And so she went all in.

"She is the first bear digging her den there," Lepaja said. "She looks such in a hurry!"

Captive bears don't get to follow their natural instinct to hibernate in the winter. Thankfully, Luna was given the opportunity to follow her instinct to buckle down and rest last year. And, if her preparations now are any indication — she has constructed two dens so far — it seems she really liked it.

Luna shook the dust off after digging her dens and looked around her home.

A slight upturn at the corner of her mouth made it seem like she knows how lucky she is to have her new life — even as she spends the next several months sleeping through it.

"Luna hibernated last winter for the first time from beginning of January until end of March," Lepaja said. "The chances are that this year she will hibernate earlier."

To help Four Paws rescue more bears like Luna, you can make a donation.