Overweight Bear Is Less Than Thrilled With His New Diet

When Dillan first arrived at The Wild Animal Sanctuary in Colorado, the large moon bear lumbered into his enclosure hesitantly. He soon discovered a bowl overflowing with fresh fruit and vegetables and realized everything was about to change.

Up until he was rescued at the end of January, Dillan had spent his life inside a small concrete pen at a Pennsylvania roadside zoo. Without space to exercise, the bear quickly gained weight — leaving him twice as big as he should be.

The extra weight has taken a toll on Dillan’s health, putting stress on his ankles and feet and making it difficult for him to move around. But his rescuers are determined to help him drop the extra pounds. 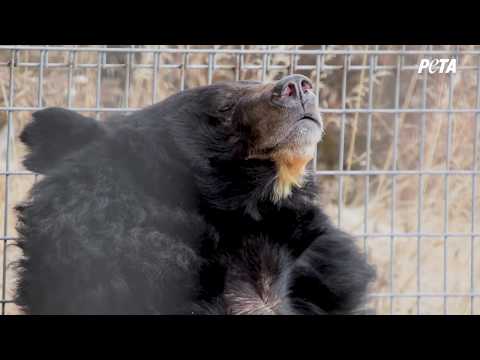 Dillan isn’t too excited about exercise — instead, he’s taking the opportunity to relax in his new space. Unlike his old home located next to a shooting range, the sanctuary is the perfect place for Dillan to take a much-deserved nap.

“[He] just seems to enjoy the peace and quiet and in a very relaxed way slumbers off and on throughout the day,” Drotar said. “He has fallen in love with the firehose hammocks that we use for our animals.”

At the sanctuary, Dillan is no longer showing signs of stress and when he is awake, his personality is starting to come out.

“Dillan is turning out to be a bit of a ham,” Drotar said. “He seems to enjoy mugging for the camera and likes the positive attention he receives.”

There's even more fun stuff in store for Dillan. Soon, he'll get a bigger home where he will be able to romp around a multiple-acre habitat with another rescued moon bear. His caretakers are hopeful that getting outdoors will help kick-start the weight loss, transforming him into a whole new bear.

But, for now, Dillan couldn't be happier: “He is enjoying and learning how to live a life of luxury,” Drotar said.

To help support Dillan's recovery, you can make a donation to The Wild Animal Sanctuary.