The dominant stories people tend to tell about sharks just don't line up with what happened to a diver off the coast of Portugal recently.

The shark gradually came closer and closer. But Ulivi said he wasn't scared at all, and actually found the proximity to a wild shark exhilarating.

"Usually blue sharkes are super curious and commonly they approach divers really at a short distance," Ulivi told The Dodo.

Ulivi, being in the business of diving, knows that sharks hardly ever want to hurt anyone, despite what "Jaws" and other narratives might suggest. In fact, your chance of being killed by a shark is about 1 in 3.7 million.

But even Ulivi seemed a little surprised when the blue shark came right up to Ulivi, almost like he was expecting a hug. Then the shark gently booped Ulivi right on his face, as if giving him a kiss.

"This guy was trying to test me," Ulivi said, about the shark's up-close inspection. "Good food or not?"

Many other videos and stories don't show sharks in an accurate light, according to George Burgess, noted shark expert and director of the International Shark Attack File at the Florida Museum of Natural History. "The reality is most of those videos you see of the sharks jumping out of the water chasing something, they've been lured by photographers using styrofoam props in the shape of a seal," Burgess told The Dodo after another incident between a surfer and a shark.

A bad reputation is literally killing them — 73 million sharks are killed each year for shark fin soup alone, and it could make them go extinct. 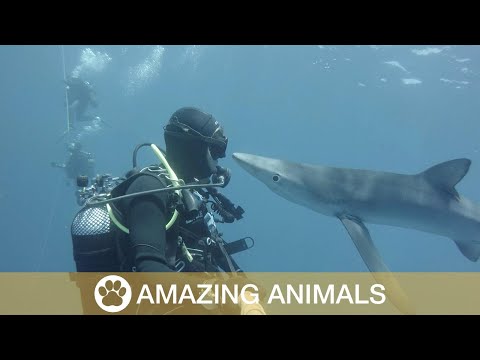 Maybe more people would care about saving sharks if people saw a bit more of their sweet side.

Update:This piece has been updated with comments from the diver.

To help save sharks, you can symbolically adopt one. You can also share this story to show these animals in a different light.