Wild Belugas Open Their Family To A Little Lost Narwhal

He never leaves their sides.

Several stunningly white whales can be seen cutting through the dark water.

But then closer inspection reveals that one of these whales is much grayer in color — and has a horn.

For the past three years, a wild narwhal — informally known as the "unicorns of the sea" — has been seen swimming with the group of wild beluga whales. This narwhal has strayed far from his Arctic home; the animals are usually found hundreds of miles farther north.

But the beluga whales have apparently accepted this lost narwhal as one of their own, and happily so. The young male narwhal has been observed playing with the beluga whales and even imitating them by blowing bubbles.

"They are in constant contact with each other," Robert Michaud, president and scientific director of Group for Research and Education on Marine Mammals (GREMM), the nonprofit research organization that has been tracking the interspecies friendship, told CBC News.

Beluga whales and narwhals actually belong to the same cetacean family, the Monodontidae — and so perhaps this is one of the reasons this narwhal feels particularly comfortable with his beluga friends. While both species face threats due to habitat loss and warming oceans because of climate change, this particular narwhal and his adopted family appear to be safe and healthy. 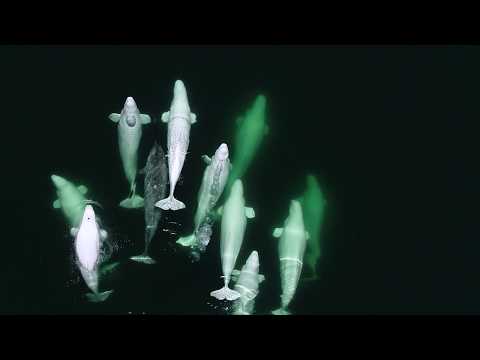 Some people even see a valuable takeaway from this narwhal's story.

"I think it shows … the compassion and the openness of other species to welcome another member that may not look or act the same," Martin Nweeia, a researcher at Harvard University who studies the narwhal's unique horn (which is considered a kind of tooth), told CBC news. "And maybe that's a good lesson for everyone."

You can help protect these special animals by making a donation to GREMM.