Watch This Adorable Baby Flamingo Learn To Stand On One Leg

Flamingos are usually known for two things: Being pink, of course, and being able to balance perfectly on one tiny little leg.

But flamingos aren't born this way. For flamingos to become that perfect pink color, they need to eat certain things, like shrimp and algae, that are high in beta carotene.

And standing on one leg — like many other things that babies of all kinds have to learn — comes with practice.

Just take a look at a recently posted video that shows one fluffy baby flamingo trying to stand on one leg. 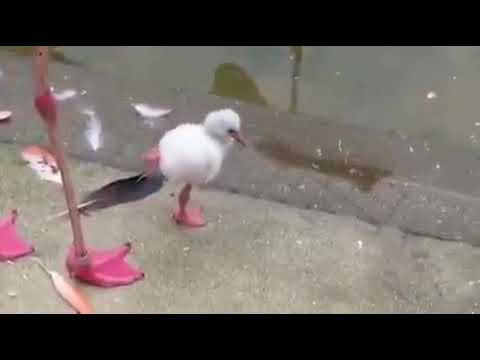 Standing beside the bright pink twiggy leg of her mom, the flamingo chick in the footage can be seen stretching out her left leg behind her, as if preparing to try that signature flamingo move.

Several times, the chick manages to pick up her little leg for a few seconds, tucking it under her fuzzy feathers, before setting it back down again.

It's actually important that the little chick learn how to do this. The preferred sleeping position for flamingos is one-legged standing.

The reason flamingos stand on one leg was a mystery until recently: A 2017 study found that standing on one leg may actually allow flamingos to use less energy.