“If you have a soft spot for animals, this place will break your heart.”

When Anna Davis planned her trip to Sendai, a city to the northeast of Tokyo on Honshu Island, she knew she had to stop at Zao Fox Village.

As a longtime animal lover, she couldn’t pass up the opportunity to visit a place that boasted over 100 fluffy foxes roaming freely in a natural preserve tucked away in the mountains.

Davis, who volunteers with a wildlife center in New Jersey, hoped Fox Village would be similar to the animal sanctuaries she experienced in the U.S. But when she arrived, she had an uneasy feeling about the place.

Approaching the entrance, Davis could see young foxes locked in small wire cages, set up right in front to lure tourists inside.

After paying the admission fee, she received a bag of dry food, hard brown cylinders that looked like “dog kibble,” Davis told The Dodo, and an employee introduced the safety guidelines.

Davis was instructed not to touch or hand-feed the foxes or risk being bitten. Visitors were also told that if an animal were to become aggressive, they should “stand tall and try to scare them away,” Davis said. The staffer cautioned that while the foxes may look cute and friendly, they were still wild animals.

For an extra charge, however, visitors could pet one of the domesticated foxes, and even hold the sleepy animals on their laps.

Davis knew then that Fox Village was no sanctuary.

As she walked inside the animal park, any illusion Davis had of a fox-filled paradise was quickly broken.

As promised, she saw at least 150 Japanese red foxes, as well as six other rare breeds, including a morbidly obese Arctic fox chained to a post.

While inside was far from a natural environment — even worse was the smell.

“It was a hot July day, and the area was really dusty,” Davis said. “It smelled like feces, and the heat just seemed to make it worse.”

Davis walked a path inside Fox Village’s 18,000-square-foot open-air space known as “hotel street.” On either side of the path, piles of stacked wooden planks served as rest areas for the free-roaming foxes or held wire cages with less docile animals.

“The ones that were kept in cages had very little room to turn around and display natural behaviors,” Davis noted. “The ones that were allowed to 'roam' did so in a dusty environment with little foliage and shelter from the sun.”

While some foxes looked healthy, Davis noticed that others were emaciated, their fur patchy and thin. The fur loss reminded her of the animals she had seen being treated for mange at the wildlife center back home.

From a wooden feeding platform, visitors dropped food pellets down to dozens of gathered foxes; the animals fought with each other at the base of the structure. But the foxes didn’t subsist on pellets alone — mounds of a cat food-like substance sat on plates around the space.

“The pile of pink mush on paper plates for the foxes really stuck with me,” Davis said. “Flies were buzzing around the pile of mush, and it just looked awful.”

Some foxes followed the tourists around the enclosure, pulling at their clothes and begging for treats. These aggressive begging and fighting behaviors are a symptom of overcrowding, and living in a mid-to-high-stress environment, Rob Laidlaw, executive director of Zoocheck, a wildlife protection agency, told The Dodo.

In Japan, foxes primarily inhabit sparsely populated mountainous areas, or the outskirts of villages. They do not naturally come into contact with humans or, for the most part, other foxes, he said.

But with over 100 foxes crammed in such a small fenced-in space, competition is bound to arise between the naturally territorial animals.

“You look at these 100 animals in less than half an acre, and it’s not even set up very well,” Laidlaw told The Dodo. “It’s barren — there are some furnishings, but it’s grossly overcrowded.”

“If you look at how they live in nature, you can occasionally find them in fairly intense concentrations — but those concentrations are still small,” Laidlaw said. “In the wild, I’ve seen six foxes living close to each other, but I don’t think you see more than that. You usually see them alone, and they have fairly expansive home ranges.”

Makiko Nakano, a veterinarian based in Japan who has visited Fox Village, agrees that the environment takes a toll on the animals physically, mentally and emotionally.

“[Fox Village] keeps foxes in a totally different way from their natural biology,” Nakano told The Dodo. “[Foxes] do not live in groups. They cooperate only to raise their cubs and otherwise live solitary lives.”

“There is a possibility that the foxes have adapted to their unusual environment, as all of them are bred in captivity,” Nakano added. “However, this environment … can give wrong information to visitors.”

Davis isn't the only visitor to be shocked by the environment. Numerous reviews on TripAdvisor cite a high density of foxes in the open-air space, a terrible smell and emaciated animals kept in cages.

"I had been looking forward to visit the fox village for a long time, but I have to say that what I saw was a hideous experience,” one reviewer wrote. “The images you see online are only half of the truth. Other half is foxes in incredibly small cages similar to fur industry animals.” 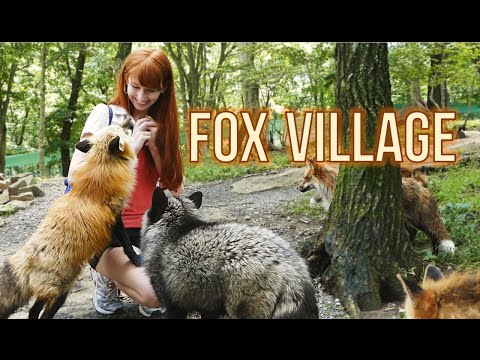 “We saw foxes who looked malnourished and sad and sick,” another reviewer wrote on the site. “The special 'fun feeding area' lets you witness hungry foxes viciously fight each other for small dog treats that you pay 100 yen a bag for. We saw foxes chewing on ladders and pieces of aluminum siding. We saw a ladder fall on a fox.”

“You are not allowed to take photos or videos inside and I can see why,” he continued. “I’m sure they don’t want people to know how bad the conditions are for the foxes.”

While the open-air space is the main attraction of Fox Village, not all of its animal inhabitants are allowed to roam freely. Siphoned off from the central space, there’s a hospital area where sick and injured foxes in wire cages are separated from the general population. This is also where visitors can pay to snuggle a fox.

Toward the entrance of the park, newborn foxes and their mothers pace in small wire pens. With dirt floors and only a crude wooden box for privacy, the pens are a far cry from the cozy dens where wild foxes spend their first formative weeks.

Typically, a fox kit won’t emerge from his den to play until he is at least 1 month old, and will stay with his parents for a total of seven months before heading out on his own. However, in Fox Village, once the babies are deemed old enough by their caretakers, they “graduate” to a larger wire pen with the other juvenile foxes, and then to the open enclosure. Nakano worries the process happens too quickly.

“I am concerned how long the young foxes are separated with their mothers,” Nakano explained. “I am seriously concerned that young foxes are displayed before weaning to attract visitors, as Japan does not have any standards on displaying young animals.”

Removing a fox from his mother too early can lead to behavioral problems and other detrimental effects.

“Foxes, wolves and coyotes all experience that learning curve with one or both parents, and when an animal is removed from its parent or proper social context, you’ve got a very distorted type of social development in these animals,” Laidlaw said.

“The reason you take them away from their parents is that you are usually trying to take the wild out of them, make them more attractable and used to being handled,” Laidlaw added. “It may work to the benefit of the proprietors of these places, it may work for the visitors, but in most cases it’s going to catch up and have a detrimental impact on the lives of the animals”

The regular breeding of foxes so as to have young, docile cubs on hand at all times can lead to a surplus of animals. With no regulations or oversight, there’s no way of knowing just how many young foxes wind up at Fox Village, and how many never make it out of their cage.

While Fox Village promotes itself as a sanctuary-type establishment that gives “unwanted” foxes a better life, in reality, it is simply a tourist attraction. And though caretakers may be doing the best they can, the foxes are ultimately there for visitors’ entertainment, noted Prashant Khetan, chief executive officer of Born Free USA, an animal advocacy nonprofit.

“The moment you start charging people to be entertained by animals, you stop being a sanctuary built around the notion of compassionate conservation, and instead have become a business with the goal of making money,” Khetan told The Dodo.

Nothing about the animals’ lives inside Fox Village is natural, and that can be problematic once the animals are no longer useful to the institution.

“When animals are used for entertainment, they are being asked to perform in a certain manner, even if it’s just to act in a certain way so that people will want to look at him/her,” Khetan explained. “It is unnatural, and often results in physical stress on the animal that cannot be sustained for long periods of time.”

“When the time comes when the animal is no longer performance-worthy, then what do you think happens to that animal?” Khetan added. “He/she can’t be released back into the wild because they won’t survive.”

“The way they are promoting these animals, which is a vein you see in Japan with owl cafés and penguin restaurants, this idea that these animals are cute, they’re accessible and in many situations you are able to make contact with them,” Laidlaw explained. “The promotion of them in that way, which largely says to people, ‘They’re cute, and cuddly, and they’re pets,’ misrepresents the true nature of these animals and does a disservice to them.”

As Davis wrote in her TripAdvisor review, “If you have a soft spot for animals, this place will break your heart.”