I'm sitting on a bluff looking west over Haro Strait - an immense, slate-gray artery of the Salish Sea's connection to the Pacific Ocean. The boys are down on the beach below, carousing in the sunshine. I see plumes, just south.

"The whales are coming back," I shout at the top of my lungs. The boys and my husband come scrambling up the hillside. My husband and older son move down in front of me. We are 50 feet above the water, a natural amphitheater overlooking this cove. We've already seen some of the Southern Resident killer whales swim by earlier, at Lime Kiln Point just north of us. But something's different this time. I see my son, camera in hand, hunched forward in awe. The whales spread out. They're in fishing formation. All ten of them in an arrow-straight line, side-by-side like a living wave, coming right towards us. My younger son sits with me, rapt.

Our sons look out over Penn Cove. (Photo: Rachel Clark)

"They're herding the salmon," I holler down. This is what's different. The older one nods. His shutter is snapping fast.

The whales come. They grow larger. I realize I'm not breathing. We are a hundred feet away, and they are Goliaths. Their black skin flings sunlight back up at us, glinting; the smooth, taut muscle power of them almost overwhelming to behold. The shutter snaps faster. They are just below my son. Foraging at high speed. You can hear their wake. Their breath makes rainbows. The sound of their blows: the whoosh, the togetherness, the high-speed rush of air.

I know these are females and calves. Synchronized. Grandmothers, mothers, sisters and young. A massive bull trails behind. Perhaps keeping watch or snatching up fleeing fish. I know this family will stay together for their entire lives. Inseparable. Even my bonds with my own sons will not keep us so close.

And I know this moment is seared into us. My boys, myself, my husband. The wild whales below, swimming free, foraging for the salmon that - because of our human impacts - are hard to find.

A month after seeing this wild display, SeaWorld announces it will make bigger tanks. A few weeks after that I learn that two more Southern Residents have died too soon, bringing their numbers down to an even more perilous 78. One more has been born, but 79 is still too few.

Our sons are 10 and 13 years old. When their teachers ask them, "And what did you do this summer?" They'll have the precious ability to say, "I saw wild killer whales."

Our family traveled to San Juan Island, Washington this summer to attend SuperPod 3, an extraordinary gathering of people committed - through science and a deep respect for the natural world and its inhabitants - to one of the most magnificent keystone species ever to evolve on Earth. Orcinus orca. The killer whale.

Wild orca create a wake with their fast-moving foraging formation. (Photo: A. Caudill)

Inextricably linked with salmon for tens of thousands of years, the Southern Resident killer whales intertwine with Chinook salmon as the pinnacle totem symbol of the Pacific Northwest. In fact, the other reason we're here is because of salmon - my husband studies the impact of dams across the PNW on salmon populations.

So my boys are no strangers to stories and data and science-driven soliloquies on all things Nature. Because here's the thing. What our boys learned on San Juan Island is the antithesis of what a captivity-based theme park can ever give them. And yet even here in "the wild," the looming specter of the capture era darkens the Salish Sea. Before we boarded the ferry from Anacortes to San Juan, we took the boys to Penn Cove on Whidbey Island.

The week before, I'd shared the documentary Blackfish with the boys, so they knew about Penn Cove and the capture era - when it finally ended, it had ripped away or destroyed close to a third of all Southern Residents.

[WARNING: Graphic videos. To see what happened in Penn Cove, watch this short segment of Baby Wild Films Presents: The Killer Whale People or read Orca Network's overview of the capture era. You can learn more in from the documentary film Blackfish.]

When we got to Penn Cove a little while later, and we stood on the dock overlooking what happened all those years ago, the boys were somber.

"Someone should build a huge statue of an orca jumping up out of the cove, as a memorial," my older son said.

"They never came back again?" asked the younger one.

"No, sweetie. Ever since the Penn Cove captures, not one of the Southern Residents has ever come back here ... ever."

So the next day, when the boys see the wild whales for the first time in their lives, I know they have a context for what they're about to see The naturalist gave us a heads up a few minutes ago, "The whales are coming!"

The boys run ahead and scramble down the tidal boulders next to Lime Kiln Lighthouse. We find the perfect spot, right down by the water and wait. I glance at my husband over the boys' heads - they've both got binoculars glued to their eyes.

"There they are Mommy!" screeches our younger son. I hear the shutter clicking as our older son zooms in. I hear him draw in his breath.

"They're so big," he whispers from behind his camera.

I look at my boys as they behold the hallowed, highly evolved, epically intelligent and social orcas swimming just offshore ... whales who've been forever impacted by an era of human folly. And I understand that - now, today, in our era of domination-the whales and our children are just as inextricably linked as the orcas with the salmon.

A month later when I tell them SeaWorld plans to build bigger tanks, and that they want to keep breeding their captive whales instead of retiring them, the younger one's face goes flinty: it's a look I'm starting to recognize.

"Why would someone rather sit around a tank watching a really unhappy orca do tricks, with hundreds of other people sitting there, too...when you could be out on the ocean seeing them free and happy?"

That, is one of the biggest questions of our time. 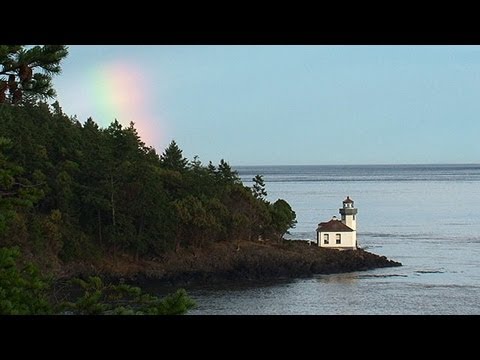