Homeless Dogs Found Clinging To Each Other For Comfort

Arlo the husky and Spot the poodle were brought into the Humane Society Silicon Valley (HSSV) after they were found wandering the streets of Oakland, California. It's unclear how these two first met or if they were abandoned together, but either way, they've been with each other long enough that they refuse to ever leave each other's sides again.

"They are very, very bonded and Spot is very dependent on Arlo," Finnegan Dowling, the social media manager at HSSV, told The Dodo. "She's very shy with people, but will follow Arlo around and trust people if Arlo trusts them."

Spot was incredibly matted when she was found, all the way down to her skin, and had to be shaved.

She and Arlo were separated during that time, and even though it was only for a little while, they were both overjoyed when they were reunited again. For these two, being apart just doesn't feel right. 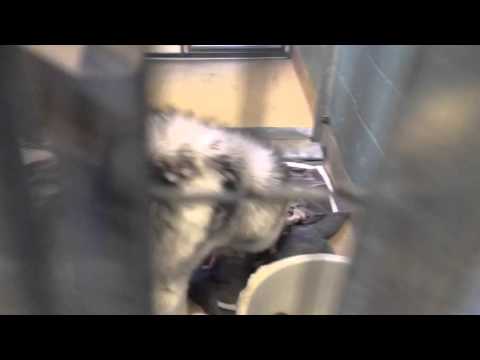 Volunteers have since been dressing Spot in sweaters to keep her warm ...

... but, mostly, she just cuddles up to Arlo when she's feeling chilly.

The pair is always snuggling together and Spot's favorite place to be is on top of Arlo. "Arlo definitely keeps an eye on where she is all the time. They hate to be apart," Dowling said.

The street survivors are a bonded pair and the shelter refuses to separate them - when they are adopted, it will be together. No exceptions.

Sadly, Arlo recently became ill with an aggressive case of pneumonia and is currently fighting for his life at the HSSV hospital. Veterinary staff are still trying to determine whether or not Arlo is contagious. Once he's clear, he and Spot will be reunited - she is currently being kept with another dog while Arlo is treated.

It's still unknown how serious his situation is and, until he gets better, adoption requests for him and Spot will be on hold.

If you would like to help Arlo, you can donate to Humane Society Silicon Valley to support his cause.