The whales literally mob the orcas to stop them from hunting.

Orcas are also known as "killer whales" for a good reason - they are incredible hunters.

The tightly bonded pods often work together to coordinate hunts. But scientists noticed something interesting about some of these hunts. Sometimes a humpback whale would come along and try to interrupt the killing.

One such instance was captured in BBC's documentary series Planet Earth. Orcas separated a gray whale calf from his mother and repeatedly pushed the calf under the water to drown him.

All of a sudden, two humpback whales swam over and placed their own bodies between the wounded calf and the hunting orcas.

Curious about this behavior, scientists examined 115 interactions between orcas and humpback whales. What they found was truly baffling.

When humpbacks approached orcas, it was usually when the orcas were attacking or feeding on prey, and often the humpback whales would harass the orcas, which the scientists called "mobbing behavior."

The scientists believe that the humpbacks heard the cries of the hunting orcas without knowing what animal was in danger, and they came to the rescue anyway. While it would make sense for humpback whales to protect their own kind from getting killed, "there was no apparent benefit to humpbacks continuing to interfere when other species were being attacked," the study said. "Interspecific altruism, even if unintentional, could not be ruled out."

As for the gray whale calf caught on camera that the humpbacks tried to protect - sadly, he perished in the hunt.

But the wild orca pod was able to stave off hunger for a little while longer.

And the humpback whales who had tried to save the baby's life remained at the site of the killing for six hours, even after the dead calf's mother left. 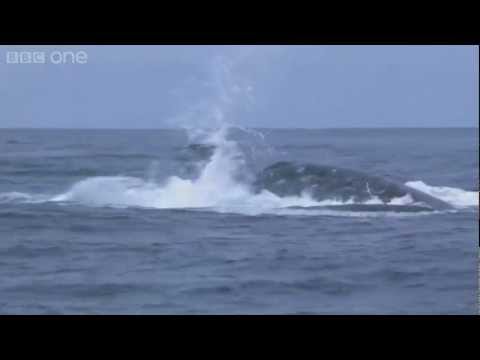