How To Tell Whether Your Local Zoo Is Hell For Animals

Zoo-going is an American pastime. Some 150 million people in the U.S. visit zoos and aquariums each year. And when the kids are out of school (like over the holidays), zoos can be especially popular.

But how can one tell the difference between a "good" zoo (though some might argue that captivity is never "good" for animals) and an especially "bad" one?

It isn't hard cold math, but here are a few signs that a zoo might be less about conservation and animal welfare, and more about ticket sales and making money.

Lack of shade can also be an indication that it's a bad zoo.

The animals can pick up trash outside their cages.

If an animal can reach outside his cage and grab whatever he wants on the ground, it's probably best to not patronize the zoo again or report the incident to the zoo manager.

The "conservation" signs around the zoo are illegible or dated.

It might seem extreme, but it's not unusual for some smaller zoos to keep their animals in a place that really is just this miserable.

The animals are pacing continually in small enclosures. 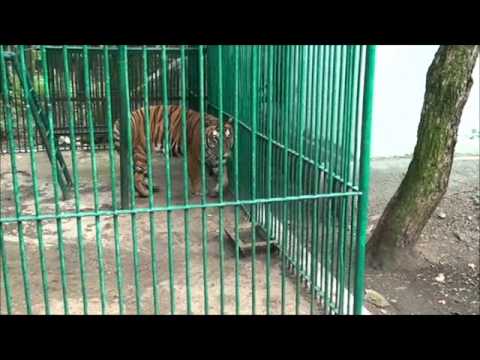 Pacing is a stereotypic behavior - something that animals do to cope with the stress of confinement.

The Dodo recently visited the Lupa Zoo in Ludlow, Massachusetts, and noticed that it had a stench of urine right at the entrance, which indicated the exhibits were not cleaned appropriately and animals were living in troubling conditions. Moreover, the camel's legs were covered in feces, according to a zoo expert.

The elephants are being trained by keepers with a bullhook.

More and more zoos are recognizing that elephants and keepers need to be separated at all times. This ensures that a keeper doesn't get hurt, and hopefully ensures that the elephants aren't being beaten or forced to do anything through dominance, fear or abuse.

But what you should really keep an eye out for is thebullhook, a sharp metal stick that some trainers use. If you do see one, chances are, that elephant has been forcibly and physically hurt at some point in his or her life at the zoo. (You can read about the kinds of contact methods that exist between keepers and elephantshere.)

This yak at Lupa Zoo was alone gnawing at the wood in his exhibit for nearly half an hour.

A social animal is alone in her enclosure.

Socialization is vital for many animals, just like it is for people. Yet Lucky has been on and off alone at the San Antonio Zoo since her arrival in the early 1960s, according to advocates who have been campaigning on her behalf for years: "The zoo has never met her needs as a species. It is antiquated, too small, the substrata is compact, she can't fully submerge in her pool, and she hasn't touched grass in at least 52 years. It is clear the zoo won't be getting elephants until Lucky dies," reads the Free Lucky's Facebook page.

Other indicators might be that there is only one elephant of either gender and "if a zoo has bull elephant and he's kept where the public can't see him, that's a bad indicator. It means that the bull is either kept in a separate, small enclosure, or the zoo rotates the elephants into the larger enclosure, meaning that the bull spends his time either indoors or in a smaller area," says Catherine Doyle, director of science, research and advocacy at PAWS.

"Keeping elephants in an area that experiences prolonged, cold winters means that the elephants must be kept indoors for a great deal of time. Some may not get outside for weeks. This can lead to problems with foot disease, joint disorders and obesity," also adds Doyle.

The bottom line is this: Some people don't frequent zoos because they don't believe animals should be in captivity at all. But if you do visit a facility, use your common sense. If the animals look miserable, and if you leave with a sense of sorrow in your stomach, then the zoo isn't right for you.