How One Chimp Found Sanctuary In Her Birthday ... And Cake And Family And Presents

By The Dodo - For Animal People, and Rachel Clark

Dodo Contributor: Rachel Clark is a science writer, biologist and author of the blog Mothering Nature at Psychology Today.

Patti turned 32 years old on September 11, though she has no concept that her birthdate rings a dark toll around the world or that she's nearing the end of being in advertising's choice demographic. She has a sister, Thiele, who was there at her party, both of them boisterous and excited. Patti and Thiele are lucky; they are together now in some remote semblance of family. Patti and Thiele are chimpanzees. Born in captivity, Patti performed for the first 14 years of her life at Marine World in California. While they were small they were manageable, but once a chimp hits maturity, she can be eight times stronger than a grown man. Such power is dangerous to humans. After just seven years, Patti and Thiele were sold. And they were separated from each other for nine years.

Enter Chimps Inc. A true sanctuary, Chimp's Inc. has one goal: to provide a comfortable and nourishing life-long retirement for chimpanzees who've lost the chance to live wild. Founded by Leslie Day, it sits in the high desert of central Oregon between horse farms and hay fields. Years ago, Day dreamt of having a pet chimpanzee but when she realized that "keeping chimps as pets could lead to tragedy" (as others have discovered), she went in the opposite direction. Day flew from Oregon to upstate New York in 1993 to meet Topo, a male chimpanzee who'd been kept in dark garage for almost 20 years. The instant her eyes met his, they formed a bond, and she knew right then that her mission in life was to offer lifetime sanctuary to chimpanzees in need. "She decided to create a sanctuary, to give these chimps a chance to recover ... and to be chimps," says Marla O'Donell, Executive Director of Chimps Inc. "It changed her life. But more important, it changed the lives of the animals who live here now." New research confirms that chimps reared with humans are fundamentally diminished, so chimps that find sanctuary get a chance at living a much fuller life that is more aligned with their wild nature.

Today, seven chimpanzees make a life with their adoptive family at the Chimps Inc. sanctuary, which provides lifelong care for chimps retired from entertainment industries or from being pets. This facility is nothing like a zoo. The animals are not on display, and the facility is not open to the public. It even has the endorsement of Dr. Jane Goodall. In fact, O'Donnell spent 15 minutes before our tour, giving explicit instructions on how to behave with the chimps so their social structures would be respected. "Everything we do is about giving them as natural a life as possible, and keeping them safe ... And be sure to watch Jackson, he's our teenage male. He'll spit on you, just to show you up," she laughs. "It's his way of telling you who's who, and that he's important ... he is a teenage male primate after all."

After the prep talk, we walk towards the chimps' large, secure enclosure. "That's Topo," O'Donnell tells us during our tour. "At almost 50, he's the granddaddy. He's the fellow that Leslie first met ... he'd lived in a dark garage at a roadside zoo for almost 20 years," she says, her affection evident. "We always greet him first and ignore the others ... it's how we show our respect to the dominant male. As the humans here, we always honor the chimp social code."

It's clear that O'Donnell honors more than the social code. After Topo ignores us for awhile, she calls to him, and he sashays over and squats down in front of her, still totally ignoring us - the strangers in his kingdom. But as we watch her with Topo, it's like watching two best friends in a wordless conversation. The smiles, laughter and easy comfort between O'Donnell and Topo is intimate. I feel almost like an intruder. Now that we've paid respects to Topo, it's acceptable to greet the others. As we walk beneath the upper bridge, where the chimps can go back and forth over us as if in the tree tops, I'm not fast enough, and Jackson lands a wad of spit right on the top of my head. I turn around to look back up at him, and his body is shaking with mirth, his mouth a wide grin.

Then O'Donnell introduces us to Herbie, the other dominant male. He's wearing a baseball hat and says hello using sign language and a grin to O'Donnell. She explains that the chimps have behavior sessions, and learn some simple sign language to make their retirement more comfortable since they do need to interact with humans on a daily basis. He waves "hello" to our group and makes eye contact. He is totally different from Topo, it's almost as if he wants to show off for us. He looks at us often, and signs constantly with O'Donnell - "more food," "give," "I want grapes," and "gift." He knows we have a present - we brought an old pair of boots.

When she offers a boot through the gated enclosure he's lightning-fast and tries to grab the outer door with such unexpected strength. She drops the boot and gets back just as fast. "He tests us all the time," O'Donnell says. "We are constantly on-guard for it." Just as suddenly, Herbie is placid again. "You never know when he's going to try to get away with something. It's why all the enclosures are double gated: for their safety and ours." Then we meet Patti and Thiele. The sisters. They are less interactive than Herbie, but when O'Donnell offers the apricots we brought along, they ask for more. Then Patti takes the cowboy hat we brought and makes off with it, away from the others, to contemplate her new gift in her hammock. She and Thiele spend hours of every day together.

"Patti's birthday is coming up, and we'll celebrate it like we do for all the chimps," says O'Donnell. "They always know when it's a birthday," she explains. "Every time someone has a birthday, we make cakes, have treats and put out ribbons and pinatas. We make sure they all have an extra special day." O'Donnell looks at our boys, two brothers. "But Patti's best day may have been the day she was reunited with her sisters, Maggie and Thiele." Day was able to track down all three sisters and make it possible for them to come here for retirement, O'Donnell told The Dodo. "I was here that day. After nine years apart, they knew each other instantly. They screamed with joy, grabbed each other hugging and laughing and wrestling, for a full three hours. They didn't let go of each other once..."

"We're one of only eight sanctuaries in the country, and, unlike so many other countries, in the United States chimps are only considered threatened - not endangered - so it's still legal to breed and sell them. Which is just not good for chimpanzees. We lobby for legal change every chance we get," O'Donnell says. Chimps Inc. is dedicated to overcoming the exploitation and cruelty they face through advocacy, conservation, outreach and education. The good news is that retirement to sanctuaries appears to be increasing and the legal tide may finally be turning in chimps' favor. Our tour took place a week before Patti's birthday celebration, but Kyra Laughlin was there on September 11- she helped plan Patti's big day.

"When I saw that Patti would be celebrating her birthday during my internship and also only a week before my own birthday, I started a fundraising page to raise the $100 we needed to sponsor her big day." Laughlin told The Dodo. "Thankfully I reached my goal in just a few days." The sanctuary functions entirely on donations: one chimp eats 12 pounds of food a day, and it costs about $1200/month to support each chimp in comfort. "We also do about 18 loads of laundry every day," O'Donell said. "We are incredibly grateful to everyone who supports our work." Laughlin explained that Patti's birthday celebration made for an extra special time for all the chimps, and the staff, who'd done a special round of shopping and set-up hidden treats for the chimps in their enclosures. "Seeing their excitement as they explore the enclosures and forage through all of the birthday treats is priceless." said Laughlin. "And my absolute favorite moment was watching Patti enjoy her birthday cake which I had made from oatmeal, primate chow, bananas, raspberry jam and grapes - she loved it so much she got another slice!"

Perhaps the best birthday present for chimps everywhere would be the end of captivity and a global commitment to preserving their native wild forests so there would be no need for sanctuaries anymore. Until then, as Chimps Inc. says, "Saving one chimpanzee may not change the world, but it will change the world for that chimpanzee." 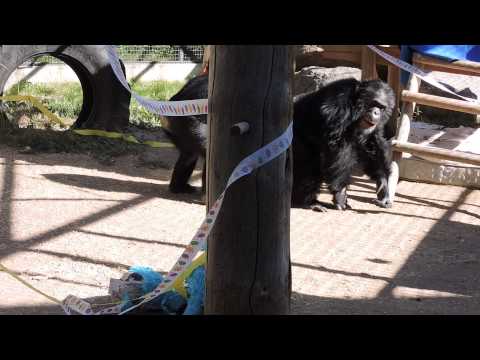