Sober Horse Prevents Drunk Cowboy From Getting A DWI

If friends don't let friends drive drunk, then Sugar the horse is a BFF.

Formerly unintoxicated cowboy, Jake Williams, found himself in a decidedly different state of being after dropping by a daiquiri shop in town earlier this week. The northern Louisiana native had been driving with Sugar in a trailer behind him, when he opted to stop in for a drink.

Well, sure enough, Williams ended up imbibing one too many of those tasty alcoholic beverages. But instead of risking the drive home drunk, he chose to do what he thought was the responsible thing - have Sugar give him a lift home.

"When you get a little too much to drink, why not ride a horse?" Williams told WBRZ reporter Brett Buffington. "It's safer that way. The horse knows the way home."

Not surprisingly, perhaps, the drunk rider atop the sober horse ended up attracting the attention of a sheriff's deputy who pulled the pair over. Turns out, Sugar doesn't qualify as a "vehicle" in the state, which meant she saved Williams from getting charged with a DWI - but she couldn't prevent him from receiving a citation for public intoxication.

A family member ended up giving Williams and Sugar a lift home, with the cowboy vowing that he'd learned his lesson - which is good, considering that Sugar shouldn't have been tasked with hauling a drunken rider in the first place.

Interestingly, while drunken Williams's decision to ride a horse didn't result in a DWI in Louisiana, that's not to say it wouldn't elsewhere. In some states, horses are considered "vehicles" subject to the same laws as a car, and riding one drunk is not treated any differently. Still, not all places are so discouraging of the practice.

A public service announcement from Montana, released a few years back, openly encourages drunk bar patrons to let their horses give them a lift home. 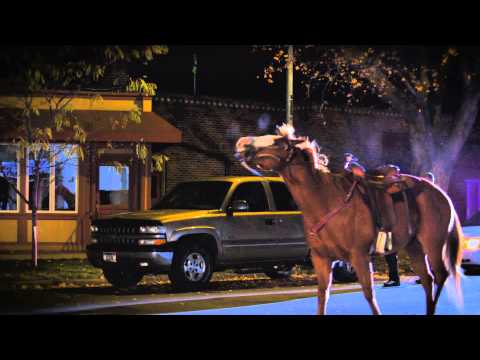 Even if it riding a horse home drunk is legal where you are, we recommend folks who are planning to drink travel home by taxi or arrange a different kind of ride ahead of time.