They searched through all of them to find him.

For months, Tank the homeless pit bull had been seen wandering the fields on an oil refinery, all alone. People passing by would try to approach him, but he was so scared that he would run away and crawl into some nearby pipes, completely unreachable.

Hope for Paws, a rescue organization in Los Angeles, heard about poor Tank and knew they had to help. When rescuers arrived at the oil refinery, it was extremely difficult to locate Tank at first among the sea of pipes he could be hiding in.

After a while, rescuers could hear the terrified dog growling, and eventually, they were able to determine which pipe he was taking shelter in. They knew they had to move slowly and cautiously, so as not to scare Tank into running out of the pipe and away from the group.

One of the rescuers quickly fashioned a large pole, and while two other rescuers secured one end of the pipe with a cage, he prodded the dog with the pole from the other end ...

... eventually scaring him into the cage.

Tank hadn't had any human contact in a long time, and at first he was so terrified ...

... but as soon as his rescuers got him to the hospital and away from the oil refinery, he realized he was finally safe, and began to warm up to the people who saved his life.

"We promised Tank he would never be homeless again," Hope for Paws wrote in a video about Tank's rescue.

Tank is now safe and sound in his foster home, happily awaiting the day his forever family finally finds him.

Check out the full video of Tank's rescue below: 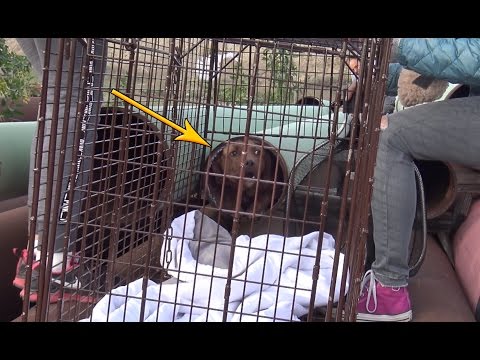