Very Nice Hippos Help Duckling Who Fell Into Their Pool

A desperate duckling who found herself in a tough spot recently received a helping hand from two unlikely allies - a friendly pair of hospitable hippos.

The little bird had fallen into the hippos' artificial pool at a zoo in the Netherlands and was having a very difficult time getting out. Despite all her hopping, she was unable to leap over the pool's concrete edging.

Meanwhile, the duckling's mother could be seen waiting in the distance. With no way of helping out her offspring, all she could do was watch and hope.

But just when it seemed there was no way for the little duckling to escape her predicament, help arrived from the pool's intended inhabitants. Two hippos approached the feathered baby, pausing as if they were assessing her situation.

A few moments later, as the pool-trapped baby bird continued hopping in vain, the hippo pair guided her along with their snouts before appearing to lift the duckling over the edge, after which she ran back toward Mom.

Hippos are often thought of as an unwelcoming, aggressive species, but while the origin of their behavior here may be open to debate, this fascinating footage seems to prove that they do have a softer, courteous side to them as well.

Watch footage from this incident in its entirety below. 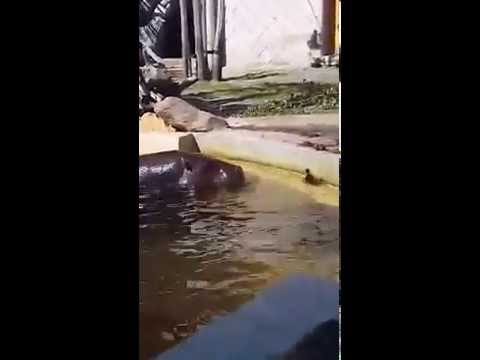