This Is What Happened To Thousands Of Endangered Birds

They're being sold as "red ivory."

You probably already know that the demand for elephant ivory is driving one of the world's most majestic animals to extinction - but you may not have heard about a bird who lives deep in the rainforest who is hunted for his own kind of ivory.

The highly unique helmeted hornbill has a call that sounds like laughter, eats figs and nests in coves in some of the oldest trees in the forests of Indonesia and Malaysia. But the bird's red beak (or "casques") is sold as "red ivory" on black markets in Asia, where it is carved into luxury decorations - and sells for even more than elephant ivory.

Confiscators in the region have been finding the heads of helmeted hornbills turning up more and more in wildlife markets. In just two years, they found 2,100 heads in Indonesia and China, and they estimate that up to 6,000 of these birds are being killed every year.

While no one knows exactly how many helmeted hornbills are left, the population has plummeted in recent years because of the illegal trade, making conservationists list the bird as critically endangered. (Just four years ago the bird was considered just near threatened.)

Not only that, because the rainforests where they live are being cleared for palm oil plantations, helmeted hornbills are facing threats from multiple sides. And because mother helmeted hornbills only have about one baby per year, staying for 160 days in the nest with her young, the species just can't reproduce fast enough.

"They have this fabulous call, that ends in cackling laughter, which you can hear from a mile away," Elizabeth Bennett, from the Wildlife Conservation Society, told The Guardian. "But they are incredibly easy to hunt because of that call: It must be the most spectacular bird call on the planet."

Click here to sign a petition urging international governments to take action to help the most spectacular bird on the planet. 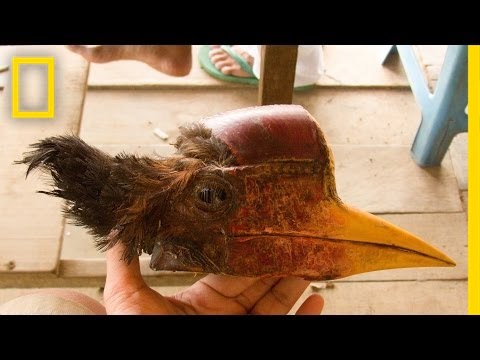