Never underestimate the power of a single voice speaking out on behalf of animals who can't speak for themselves.

Analysts from the investment banking firm Credit Suisse say they measured a huge spike in negative public sentiment against beleaguered marine park SeaWorld this summer, due in large part to four words spoken by One Direction lead-singer Harry Styles.

During a concert in San Diego in early July, Styles paused and asked the crowd, "Does anybody like dolphins?" Upon hearing cheers to the affirmative, he then told them: "Don't go to SeaWorld." 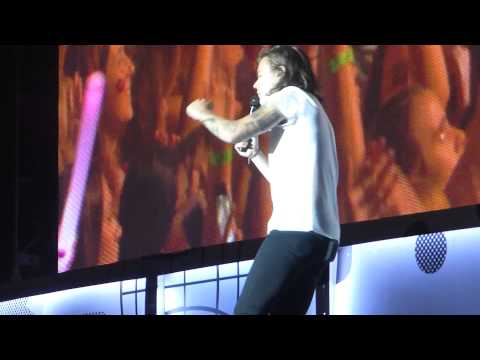 Brief as Styles's remark might have been, boy, did it resonate. Over the following days and weeks, mentions of SeaWorld online surged by 400 percent over the previous month. Not surprisingly, as The Guardian notes, the vast majority of the mentions were negative.

Another factor which is thought to have contributed to SeaWorld's sudden downward spiral was the revelation that the company had allegedly sent an employee to infiltrate a group of anti-SeaWorld protesters. All in all, it was a bad month for SeaWorld - one which comes among a slew of more bad news.

A recently released earnings report shows SeaWorld's profits have plummeted by 84 percent. Despite a massive PR campaign to sway public opinion on the company's treatment of animals, attendance continues to slide as well.

In other words, like Harry Styles, SeaWorld's becoming best known for "one direction" too: only for them, it's down.