The infamous island of Okunoshima, Japan is home to a 700-strong colony of rabbits - and the people who adore them. While letting dozens of rabbits engulf your body in a torrent of tiny toes (and probably a few rabbit droppings) might seem like a nightmare of tiny, fuzzy proportions, for this man it looks more like a dream. 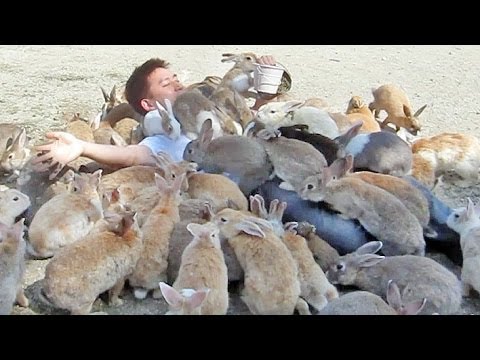 The island was thrust in the spotlight earlier this year, when a video of a "rabbit stampede" attracted over 1 million views.

It was rumored that the animals were the descendants of rabbits once used for chemical weapons testing on the island. While that theory was mainly debunked, it's more likely that the tons of bunnies are the great-great-great (and so on) grandkids of a few bunnies released by tourists many years ago. And their proliferation has only been helped by visitors, who flock to the island to feed them.

"Bunny Island" isn't the only one like it in Japan - one Japanese city hosts its very own colony of wild-roaming deer that attract a similarly devoted flock of tourists.