Don’t Pedal Away: What To Do If A Grizzly Bear’s Chasing You Down

By The Dodo - For Animal People, and Ben Guarino

With nearly 7 million views, "Bear Attack" appears to be the stuff YouTube dreams are made of. The video, posted in early November, shows a grizzly bear chasing down a bicyclist who's strapped a GoPro to his head. There's a hitch, however - it doesn't seem to be true. 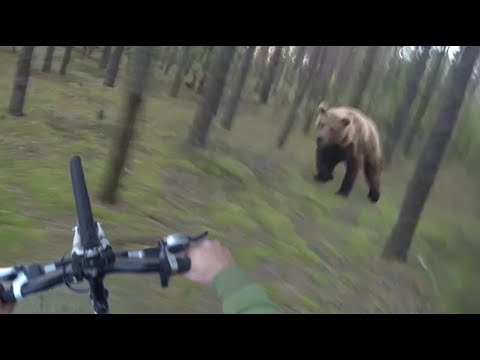 Reddit is crying foul, making a plausible argument that the encounter took place in a computer, not in the wilds of Canada. But the fact that this charging grizzly exists in CGI rather than along a biking path is, from a survival standpoint, a blessing. Bears can run "faster than the fastest human," says Lana M. Ciarniello, a grizzly bear expert and member of The International Union for the Conservation of Nature's Bear Specialist Group. At full tilt, grizzlies can hit 40 miles per hour, handily defeating the fleetest of Olympians.

Considering a grizzly's speed, the biker's choice to flee - instead of standing his ground - seems like tomfoolery. "Do not run. Do not turn your back," Ciarniello tells The Dodo. Either of these actions are apt to trigger a predatory response. Were she to encounter a bear while riding along a wooded path, Ciarniello says she would dismount, putting the bike between her and the bear. Without making eye contact - but trying to make herself seem bigger than she is - she would slowly edge away, talking to the bear to identify herself as human, not prey.

It's worth bearing in mind that ursine attacks are exceedingly rare. (Not only are the bears typically shy animals, they're listed as a threatened species in the lower 48 states.) Should you plan to travel through bear country, though, there's plenty of information to help you prepare. On bikes, for example, ride with the wind to let your scent precede you. Put a bell on your ride (a handful of rocks in a soup can works just as well, Ciarnello says). According to her research with radio-collared animals, when bears are given enough time to hear humans approach, they'll often shuffle off the paths to let us by, avoiding a confrontation.

The difference between making yourself known, versus turning a corner and bumping into a surprised bear, as Ciarnello puts it, is the difference between hearing someone ring your doorbell and waking up to find a stranger in your house. And when it comes to 1,000-pound animals with 4-inch-long claws, you don't want to be that stranger.

This post has been updated to include information on the bears' threatened status.