You probably won't see another wolf as affectionate as this big guy.

Meet Kekoa, a 9-year-old gray wolf who resides at the Colorado Wolf and Wildlife Center.

According to Michelle Smith, a staffer at the wildlife center, despite Kekoa's name meaning "brave one" in Hawaiian, he's actually quite the shy guy ...

... especially around men. But he definitely loves his ladies. In one video shared by the group, he couldn't help but give Danielle, a volunteer, nothing but smooches and affection.

"He came to Colorado Wolf and Wildlife Center as a puppy along with his sister, Sakara," Smith told The Dodo.

"They were both adopted from a facility in Florida called Seacrest Wolf Preserve," Smith said. "We had hoped they would be ambassadors (animals we can take off site) but sadly, like most wolves and high-content wolf dogs, once they reached maturity they became very shy and 'retired' at the ripe old age of two."

(As ambassadors, the wolves would have been allowed to travel for educational purposes - to places such as schools or other institutions of learning.)

Despite how friendly Kekoa is, it's important to also remember that he is an exception and not the rule when it comes to wolves and their interactions with humans.

"Since he was raised by people and bottle fed from the time he was born, he is very well socialized, meaning he enjoys the company of people," Smith said. "This is not the same as domesticated or tame. He is still a 'wild' animal, and he does tend to show it when he is around is sister. A wolf in the wild would not act this way."

Wild wolves generally are shy of people and generally avoid contact with them. Smith said in the rare case a wolf does approach a human, it signals that the wolf may have a health problem. In such a case, for the sake of personal safety, it's important to stay calm and not run. Stand tall and look large while backing away slowly from the wolf while maintaining eye contact.

In the special case of Kekoa, however, he's just one big snuggle bug.

Check out the full video of Kekoa giving much love below: 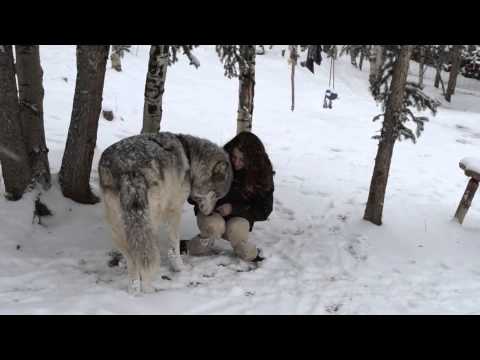