Beautiful Horses Suffer As Tourists Do Absolutely Nothing.

The Gili Islands look like a tropical paradise: People flock from around the world to luxuriate on their white sand beaches and in their crystalline waters. What tourists may not know is that they are inadvertently promoting the vicious abuse of horses who are literally getting worked to death on their behalf.

The horses are brutally beaten, neglected and whipped as they cart unwieldy loads of tourists and supplies around the islands, advocates say, given only salt water to drink and, at best, a few hours rest at night - sometimes left chained to their harnesses. Their salvation is in the hands of just a few welfare groups, hotel allies and conscientious tourists who are desperately trying to stop a culturally ingrained cycle of abuse.

The horses' life span, some activists say, is a mere 1 to 3 years.

Located off the coast of Indonesia, the Gili Islands are a sequence of three islands with stunning beaches and a booming tourist development. There is no motorized transportation on the Gilis, so the tens of thousands of annual visitors - often Americans, Europeans and Australians - can either rent a bike or pay for a "cidomo," a horse and cart, which costs about $6 for a 15-minute ride.

Cheri Beauchemin went to Gili Trawangan in 2010 and was shocked by what she saw. "I didn't know anything about the ponies on the island," she told The Dodo. "In front of my hotel there was a horse carriage loaded with tourists and luggage. At that time, the roads were mostly deep sand, and the poor pony struggled to pull all the excessive weight through that sand."

The driver, she says, beat the pony mercilessly. She decided then and there the plight of the horses would be her life's work.

Beauchemin, who lives in Bali full time, immediately launched an organization called Gili Carriage Horse Support Network (GCHSN). She estimates there are 500 horses being used on the three islands, and the group's goal is to abolish the cidomos altogether. According to Beauchemin, the horses - technically ponies due to their size - are all brutally caught from the wild on a neighboring island and brought to the Gili Islands after they have been trained to pull carriages. She says the animals are "tamed" by chasing them into a large hole, where they are left until they are "weak" and easy to handle.

GCHSN's checklist of neglect and abuse incidents is long and sorrowful. "I [have seen] horses with open wounds, horses left out in the sun waiting for passengers, horses severely dehydrated with white foam pouring out of their mouths," Beauchemin says.

Some of the horses, she says, are forced to work 18 hours a day. The constant sunshine leads to rampant eye injuries and blindness. The horses are deprived of socialization and any "playtime" with other horses. Beauchemin claims the animals don't have paddocks and sleep in filthy stalls. In some cases, the owners don't disconnect the equipment from the horse when the shift is over, so the equines are strapped to carriages all day and all night.

They are, Beauchemin says, slaves.

Some tourists are shocked by the abuse. TripAdvisor has a number of reviews about the Gilis that mention the horses. A recent review reads:

The ponies on the island are treated horribly and the abuse they are dealt with is heartbreaking. For a minimum of 12hrs a day they are forced to cart massive amounts of cargo, often more than 10 times their body weight and all without shelter or water. They're not given the most simplest of necessities and are abused throughout the process. The sight of this cruelty is enough to spoil any trip to the island, it is truly gut wrenching. Please boycott the island as it is full of rubbish anyway but by far the worst sight is this inhumane treatment of the poor little ponies. If you must go, please please please do not contribute to this horrific abuse...

Some tourists welcome the horses, however, and another reviewer wrote that it's "wonderful to stay somewhere in Indonesia where your senses are not assaulted by the constant buzz or roar of scooters or motorbikes ... all you will hear is the soothing clip-clop of horses' hooves!"

GCHSN works in tandem with other local organizations, including the Jakarta Animal Aid Network (JAAN) and Gili Eco Trust (GET). JAAN conducted an investigation into the Gili horses in 2010 and found there wasn't a resident veterinarian or farrier on the island, which means the horses' hooves were not being trimmed, leading to immense pain for horses on their feet for hours. The investigators also found horses standing in 10 inches of excrement. In one particularly astonishing finding, JAAN observed that owners were only giving their horses salt water from the wells, which leads to dehydration and illness.

Beauchemin believes the life expectancy for the Gili horses once they begin to work on the islands is a mere one to three years. "As soon as a pony has been beaten close to death or is so dehydrated from drinking salt water and suffer[ing] kidney failure, the horse is immediately sold to a slaughterhouse," she says.

Efforts by GCHSN, JAAN and GET are proving successful in some areas. GET says it offers free veterinary care at clinics two times a month and mobile clinics on occasion.

Beauchemin says hoof care is improving, as well as equipment fitting. Weight regulations for carts were implemented in November 2014, although she maintains the rules are not enforced by island officials.

Unfortunately, hotel construction is on the rise, which means the horses are needed for lugging cement, rebar, cement bags and other supplies. The zinger is this: Despite the groups' efforts, "the beatings, exhaustion and overworking have become far worse," Beauchemin says. Many of the wounds the horses endure are from "building material being thrown in a rough manner on [a] cart and hitting [a] horse's head and body. Horses are constantly beaten if they cannot pull the large loads." Beauchemin says a hotel owner told her at least one horse is collapsing per week.

The Dodo spoke to two hotel managers who are extremely concerned about the horses' welfare. Tenaiya Brookfield, vice president of sales and marketing at Aston Sunset Beach Resort, says her hotel refuses to book horse rides directly online, offering guests the choice of either walking or riding bikes. The bikes are free, which she hopes will encourage guests to use them and save money, and she recently asked the hotel to purchase 50 more of them. Unfortunately, she adds, many guests will book the horses themselves "as they don't want to walk or bike."

The other manager asked to remain anonymous due to repercussions he and his family could face from what he calls the "horse mafia." He says another hotel owner was recently beaten by six horse owners while he tried to stop a horse "whipping" session. The manager echoes what Beauchemin says; he sees the horses being abused almost daily. In an email from the Gili Islands, the manager wrote to The Dodo:

Almost 50 percent of the carts are overloaded carrying up to 6 people plus driver (the horses only weigh maybe [440 lbs.]), carrying 50 cases of beer, a ton of cement etc. a lot of guests complain as in the back roads out if the sight of tourist the horses are whipped after they collapse from exhaustion. I've seen horses buckle from too much weight and dragged to its feet to re-attach the trailer. I've seen them water them with brackish water and make them stand out in 86 degree-plus heat while 4-5 drivers rest in the cart in the shade. Many times, the horses are drooling as they are malnourished and dehydrated.

The manager said it takes only about an hour and a half to walk the whole of the island, so the horses aren't even needed. "If everyone stopped using them then it will force the horse mafia to look into other options," he says.

Video of horse in distress, according to GCHSN: 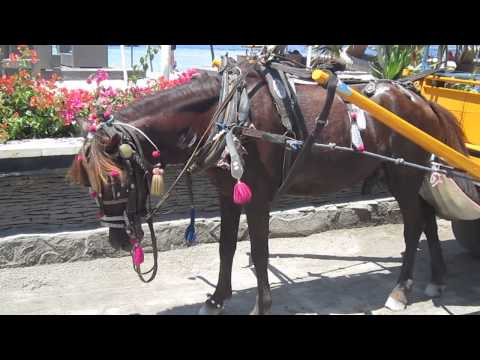 The plight for working equines like those on Gili extends to nearly all corners of the world. According to The Brooke, a charity that works to promote the welfare of working equines, there are 100 million horses and donkeys working for 600 million of the world's poorest people. Donkeys and horses are used for transportation, to carry crops, water, food, medicines or the families themselves. "Unlike equine animals in industrialized nations, who generally enjoy reasonably high status as pets and in sport, working animals often have very low status even among the nations that depend on them for economic stability," the organization states on its website.

They can be worked so hard, The Brooke's site notes, that the animals "literally drop in their harnesses."

Beauchemin is now placing her mighty hope for change largely in the public. She says she is educating tourists not to use the horse carriages, and to report what they witness to hotel owners or sign various petitions. She's also asking drivers to consider the animals' welfare with more frequency, and companies that rely on their wares being lugged around the island by the horses to do the same - but few have been receptive.

Lastly, GCHSN is advocating for a complete replacement of the horses with solar-powered tuk-tuks (human drawn carts). So far, this effort hasn't been successful, and Beauchemin says the reason is that ponies are the islands' "cultural pride."

Beth Shulman is an American volunteer with GCHSN. She contacted the organization after her first and only trip to Gili in 2012 and says the deeply rooted cultural battle is an uphill one. "My friend and I saw a horse and we went over to it and gave it an apple," she told the Dodo. "It was so skinny and so exhausted. While we were trying to feed the horse, the driver just sat there, smoking a cigarette, laughing at us."

"You simply can't imagine how bad it is," says Shulman. "You can't even believe these horses are still living."

You can help the Gili horses here.

Learn more about the world's working horses and The Brooke's work here: 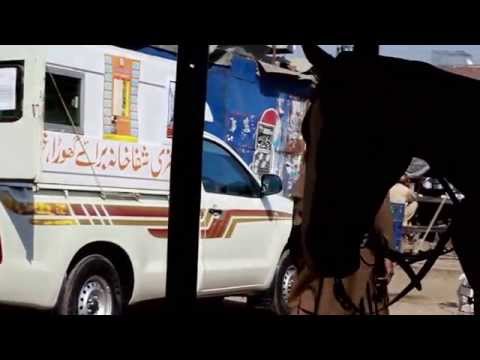