By The Dodo - For Animal People, and Ben Guarino

When a Japanese giant salamander decided to take a stroll this Fourth of July, the large amphibian ended up with a perk normally reserved for VIPs -- a police escort.

Considering their penchant for cool streams and their nocturnal habits, giant salamanders are rarely spotted out and about during the day. The sight of this salamander alarmed some Kyoto residents so much they phoned the local law enforcement.

At first, the police department didn't believe the sightings, the Austrian Times reports. "Not only are they very rarely seen on land, but also if they do come out, it is usually only at night. So to see one lying beside the road apparently enjoying the sunshine is very unusual," said police spokesperson Fuyuki Fujino.

Upon arriving at the scene, the escort stood watch until the salamander decided to shamble back into the Kamogawa River.

Japanese giant salamanders, also known as "giant pepper fish" thanks to the peppery smell they exude when threatened, can grow to more than 5 feet long and live for more than 50 years.

Check out the full video of the salamander's stroll here: 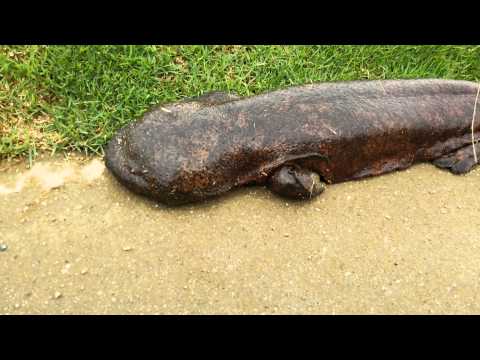