Divers exploring the waters off Costa Rica recently had an extraordinary encounter with one of the ocean's most majestic creatures, who, in the throes of a life-threatening predicament, approached them as if to ask for their help.

The group was partway through their dive when an enormous manta ray appeared in the distance, swimming in their direction. As the animal got closer, the divers noticed that she was entangled in rope from a fishing net which was cutting into her flesh.

Amazingly, instead of diverting course, the manta ray continued toward them, close enough for diver Brian Thompson to unwrap the thick line from her body.

"It was the first time I saw a manta ray. There was a very profound interaction between her and the diver," Thomaz Monteiro, who was present for the surreal scene, told news outlet G1 Globo.

Once the fishing net was removed, the manta ray continued to linger for 30 minutes around the divers before she swam off, disappearing into the dark depths. The remarkable encounter may have lasted only a few moments, but it's surely one that the divers won't soon forget.

"I felt so strong a love for her and happiness to know that she was free and could enjoy her life again," said Thompson. 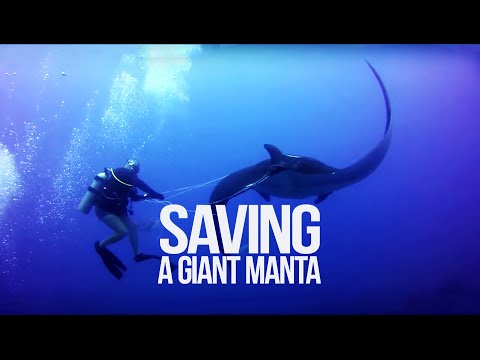