Fisherman Finds Exhausted Bald Eagle At Sea, Gives Him A Lift To Shore

Canadian fisherman Dan Dunbar was cruising in a boat near Nanoose Bay, British Columbia when he spotted a young bald eagle floundering on the surface of the water. Although bald eagles are known to be quite capable swimmers, this particular bird appeared unable to take flight again.

As Dunbar began to think of how he might try to help, the bird used his wings to inch closer to the vessel, speaking aloud to offer the animal a few encouraging words:

"Hey, buddy. What do you figure? Want to come aboard? I'd throw you a lifejacket, but I don't got one that'll fit you."

Before Dunbar had the chance to grab his net, however, the bird drifted away again, so he powered up the engine to move closer.

After getting within reach, Dunbar - who recorded the entire 12 minute rescue, ripe with uplifting commentary - then scoops the bird up from the water.

"There you go. Are you a little tired?"

The bald eagle, though shaken and cold, did not appear to be visibly injured. Once aboard, the bird stretched his wings to warm himself, keeping a watchful but tolerant eye on Dunbar as he filmed and continued to make conversation with him.

"I've got to say, you're the most unusual fishing partner I've ever had. But you're probably better at that than me though."

Dunbar reports that the bald eagle was then picked up by Wildlife Rescue and transported to the Orphaned Wildlife Rehabilitation Society (O.W.L.) to be treated.

O.W.L. veterinarian Dina Lee told The Dodo that the bald eagle, probably around three years old, does not appear to have any injuries to his wings that would prevent him from flying, calling the fact that he was found stranded at sea "odd."

Lee says that accidental poisoning is a likely factor, noting that birds can fall ill after ingesting animals that may have come in contact with rodenticide used by farmers to keep pests at bay.

"When the fisherman fish him out onto the boat, there wasn't any fishing line tangled around him, and when he came in, there wasn't any clear break. But he wasn't eating food very well, so we're suspecting there might be something in him, so we're taking x-rays to see," says Lee. "We'll do everything that we can." 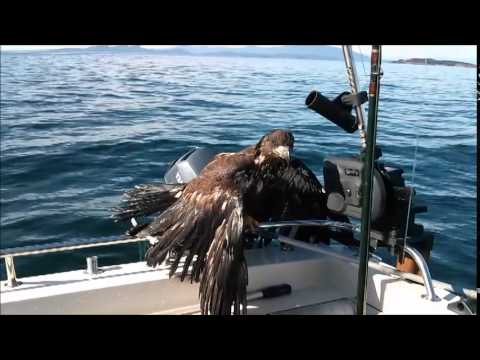