The 2016 Guinness Book of World Records winners were just announced, and there are definitely some shockers. There's a dog who can catch multiple soccer balls in under a minute, a cow with exceptionally long horns - and the fastest tortoise in the whole world.

That's right: There's a tortoise who ISN'T slow - well, at least, not slow for a tortoise. Bertie, the Guinness Book of World Records winner, was called the Usain Bolt of tortoises by CNN. Bertie lives in England with his owner, and can go 0.6 miles per hour. For a tortoise, that's REALLY fast.

The previous record was held by a tortoise named Charlie ... who won in 1977 - so the time to surpass the record was indeed long overdue.

Bertie has a girlfriend named Shelly, and when he's not breaking records, he's constantly with her. Sounds like the record was broken by a stand-up guy (er, tortoise).

The 2016 edition of the book is available to preview online, where you can see Bertie in all his published glory.

Check out the video coverage about Bertie below: 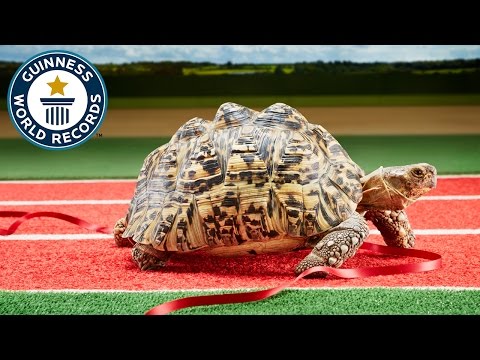