He wanted them to have somewhere to grow old and happy.

Mike Lanigan was just a kid when he moved with his family to a farm. And for the next few decades, the sprawling site in Uxbridge, Canada, operated like a lot of farms - raising animals to sell as meat in the local market.

But after years at school and a stint with the forestry department, Lanigan decided it was time do something different at the farm.

He figured the animals he had grown up around and formed such a strong bond with might like to grow old there. And beyond that, he wanted to offer refuge to other animals in need.

In other words, Lanigan decided his cattle farm should be an animal sanctuary.

"This is the first year we haven't raised pigs or chickens," says Lanigan in a recent video made by Edith Barabash, who works with him at The Farmhouse Garden Animal Home.

And the farm's 21 cows, along with horses and geese, and a "guard donkey" named Buckwheat, will call these 100 acres home for the rest of their lives.

But Lanigan is hoping to give them some company.

"I thought maybe we'll start taking in rescued cows," he says. "Or ones who have been taken by the SPCA or something."

Lanigan was inspired, in part, by an elderly farmhand he had seen working for his father.

Years later, when Lanigan was helping one of his cows bring a baby into the world, like an expectant and tender father, he remembered that man.

"And I thought, 'How hypocritical of me to give something so much love and the end thing is so different from that love,'" he says in the video.

Lanigan took that love to heart when he made his decision a couple of months ago.

Of course, the road to building every sanctuary is paved with good intentions. It's one thing to turn land into refuge for animals - and quite another to sustain all those hungry mouths. The farm is not yet an official sanctuary.

"We don't have a specific deadline but honestly just as soon as possible," Barabash tells The Dodo. "We do need a solid amount of startup money though, because raising cows is extremely expensive. But we're getting there."

Besides, a farmer's got to put bread on the table. So Lanigan continues planting vegetables on the property and taking his produce to the market. Along with some lumber. And, being a Canadian farm, a little maple syrup.

And the cows, in their own way, pitch in too.

"It's absolutely essential to have an herbivore here," Lanigan says in the clip. "There's something about a herbivore on our land that makes my farm healthier.

"And it's not just the manure. There's some inter-relation between a herbivore walking the land and eating the grass and the rotation of healthy vegetables."

Lanigan can't quite put his finger on the nature of that relationship between a healthy farm and happy animals.

But he can feel it. From his head right down to the soil.

Follow Lanigan's journey here. You can also also help make his dream to turn his farm into an animal sanctuary by making a donation here.

And watch the full video below: 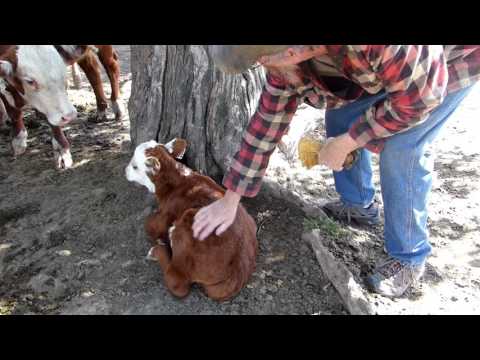