Random Act Of Kindness Changed Everything For This Little Lamb

She wasn't supposed to leave that death-ridden field, strewn with carcasses and despair.

Mostly because this little lamb was too weak to even stand on her own after being hit by a car and left to die in an Australian paddock, surrounded by other dead animals.

The farmer considered her worthless and gave her away to a passing stranger.

And with a stranger's leap of faith - and humanity - she was brought to a place of hope.

The staff at Edgar's Mission, an Australian animal sanctuary, named her Fanta. And that's when her incredible journey to the land of the living truly began.

Fanta gets her wings.YouTube / Edgar's Mission

A video posted to YouTube chronicles Fanta's transformation from first fumbling steps, with the help of a shopping bag, to her full, frolicsome glory in a meadow. Among friends.

"It's now [been] a week since little Fanta's been in our care and she's completely turned around from the little lamb [who] arrived a week ago and couldn't even stand," says Pam Ahern, Edgar's Mission founder, in the video. "She's got a determination like no other."

The shopping bag was a hand-me-down from another lamb who arrived at the sanctuary in similar straits.

Indeed, a little love, a little shopping bag - and this lamb is broken no more.

Watch Fanta's stunning transformation in the video below. 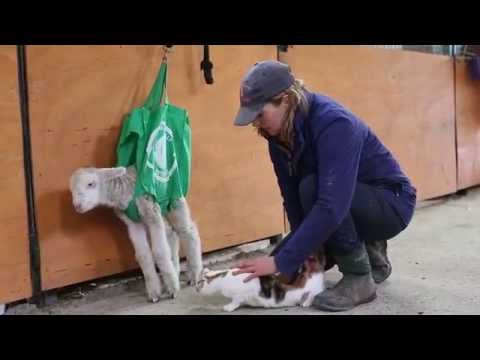