Family Of Little Owls Discover A Camera Outside Their Den

With their big, piercing eyes and proud, stately posture, owls have long been considered symbols of knowledge and wisdom - but when confronted with a small digital camera outside their den, they clearly don't know what to think.

In this video, uploaded to YouTube by Sébastien Barrio, a family of three Little owls can be seen curiously investigating a GoPro camera left running just outside their treeside home. First, an adult gives the mysterious object a few cursory looks before flying away unfazed.

Her fledgling offspring, on the other hand, are a bit more bemused by the oddball device.

One of the baby birds even moves in closer to deliver the camera a couple of curious pecks while his sibling watches on.

Little owls are among the world's most broadly distributed owl species, found throughout Europe, Asia, and North Africa, living near open fields and farmland where they feast on insects, worms and small mammals. As their name suggests, these birds are quite small, typically standing just over eight inches high. 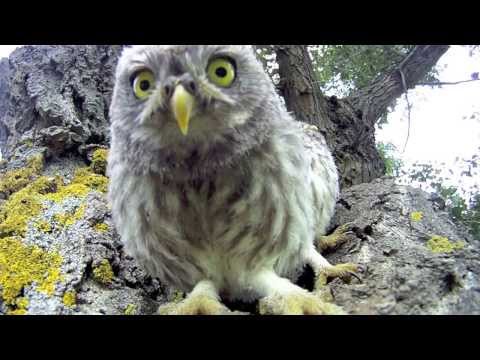 There are believed to be as many as 15 million little owls in the world, though their numbers have experienced slight declines in recent years due to habitat loss in parts of Europe.