The Sadness Of Circus Elephants, In One Photo

This is the dark truth behind the happy front of the circus.

A photo taken by former Ringling Bros. and Barnum & Bailey Circus trainer Sam Haddock shows what life is like for the baby elephants born into the circus. In the image, a row of infant elephants stands in a dark concrete room, tied to the walls with ropes and chains and, in the case of the nearest one, apparently struggling to get free. Their mothers are nowhere in sight.

The photo captures just a portion of the arduous journey circus elephants go through, which begins when they're forcibly taken away from their mothers, sometimes at just days old. The process is a heartbreaking one for both mothers and babies - as this difficult video shows. 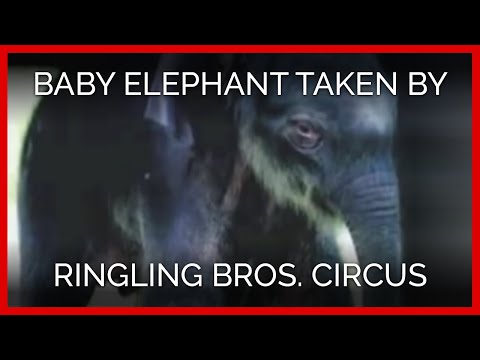 Once the babies are removed, they're prepared for life in the circus. Other photos taken by Haddock show the actual act of training the elephants, which consists of roping them and physically forcing them into the unnatural positions required of a performing elephant.

"Trainers" can be seen liberally using bullhooks, pointed, sharp instruments used to jab elephants and get them to "behave." When several cities banned the use of bullhooks, Ringling refused to perform there, knowing that trainers couldn't control the elephants without the feared instruments.

And unfortunately, it can be deadly. Ricardo, the baby shown in the video above, was euthanized in 2004 at 8 months old after he fell off a platform during training and broke two legs. In 1999, a 3-year-old drowned after running into the water to escape his trainer's bullhook. Other babies were found that same year with injured legs after being tied up.

The photos were taken at Ringling Bros.' Center for Elephant Conservation, a breeding and training center that masquerades as a conservation facility, where Haddock worked from 1997 to 2005. While Ringling Bros. announced earlier this year that it would be phasing the elephants out of its shows by 2018, there are still concerns over the choice to "retire" them to the center, essentially returning the tired elephants to the very place where these photos were taken.

And while the glimpse these photos provide into the world of elephant training is unique, the realities are anything but. Brutal training processes like these are common the world over, from U.S. circuses to elephant attractions in Asia. In Thailand and other places where elephant rides or trained elephants are common, the process is called a training crush, because it crushes the baby elephant's spirit.

Fortunately, there are people working hard to save the elephants from situations like this. The Elephant Sanctuary is a large habitat in Tennessee where former captive elephants can live out their life in peace. The sanctuary doesn't accept visitors, as the elephants have already spent their lives performing for people, but you can make a donation here and follow the elephants' journeys on the group's Facebook page.

And as performing elephants become more archaic, the best thing you can do is avoid patronizing attractions that feature performing animals. To find out more about why things like elephant rides can be so dangerous, click here.