Elephant Family Shows Motorcyclist Who Belongs In The Jungle

Visitors to Thailand's Khao Yai National Park will likely be told that the best way to get around and see the area's elephants is via motorbike.

But a video recently surfaced that shows the elephants may not agree.

The herd had already become agitated by a group of tourists on motorbikes thundering past, according to the Daily Mail, so when the elephants came across this particular individual, they were on edge.

The man reportedly tried to calm the elephants before retreating into the woods. When the herd passed, he could reclaim his noisy little machine.

"[M]otorbikes have to be banned from Khao Yai National Park," read the caption of a photograph of the encounter posted to Facebook this week.

In a natural environment, most elephants would be used to certain loud noises – a lion's roar or another elephants' grumble, according to the David Sheldrick Wildlife Trust (DSWT). But "loud, unknown or unexpected noises would normally be perceived as a threat ... obviously as habitats are increasingly encroached upon, interactions of this sort are sadly becoming more common," a representative with DSWT told The Dodo.

"In this case, it seems clear that the motorbike rider was taking too many chances by trying to pass too close to the herd. The elephants' reaction was predictable; and the biker was lucky to escape unharmed," Chris Draper, of Born Free Foundation, told The Dodo. "Elephants are extremely sensitive to sound, relying on their well-developed hearing and detecting vibrations with their feet, so it is unlikely that the motorbike took them by surprise."

"Kudos to this man for remaining calm and respectful to help diffuse the elephants' stress levels!" one commenter wrote on Facebook. Another commenter voiced concern that the elephants would be blamed for the incident: "Elephants will get the blame, same as usual!"

But the Khao Yai News Facebook page assured him in a reply: "[N]ot this time, trust me!"

Learn how to calm a charging elephant here. 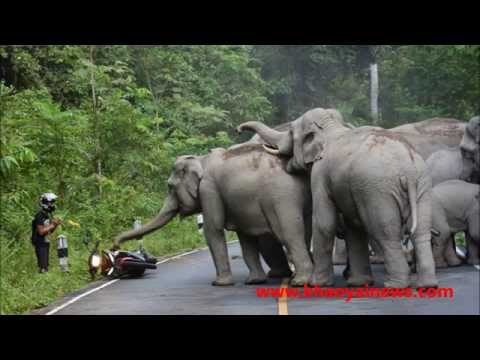