Elephant Calf Rescued After Getting Stuck Upside-Down In A Ditch

A young Asian elephant in Kaziranga, India has been freed from a tough predicament after tumbling into an irrigation ditch. The 10-year-old elephant had landed in such a way that it was impossible for him to right himself - but fortunately, rescuers soon arrived to help him get back on his feet to reunite with his family.

After receiving word of the capsized calf, a team from the Center for Wildlife Rehabilitation and Conservation and the International Fund For Animal Welfare (IFAW) hurried to the field where he'd been found.

"He was struggling to move and trumpeting, clearly in pain," writes the IFAW's Rupa Gandhi Chaudhary. "The elephant was believed to be trapped in the previous night when its herd tried to sneak into the nearby paddy field nearby and somehow this one could have fallen down into the tea garden ditch."

A veterinarian gave the elephant some medicine to ease his pain and calm his writhing, after which point the team set to work. Using shovels and spades, they carefully widened the ditch around the animal to give him more room to turn over and find a foothold.

"We did not lose hope," Chaudhary writes.

After about an hour of digging, the calf was finally able to raise himself up and out of the ditch.

"Some people clapped with joy on seeing the animal saved," writes Chaudhary. "We all moved to a safe distance from the animal to facilitate his exit from the ditch."

Although he was understandably exhausted following the long ordeal, the spirited young elephant still had energy enough to engage in a brief "mock chase" with his rescuers before venturing back into the forest to reconnect with his herd.

As agricultural expansion continues to fragment elephants' habitat in India, conflicts with humans have become one of the species' biggest threats. Thankfully, the work of the IFAW and other conservation organizations have helped spread the word that elephants, like this little one trapped in a ditch, are worth fighting to save.

Watch the entire elephant rescue below: 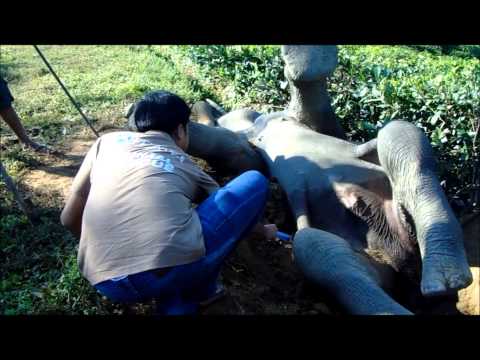