You recognize Elaine Hendrix from countless movie and television appearances, like her current role in Dennis Leary's hit comedy series Sex&Drugs;&Rock;&Roll;, but it's what she does off screen that makes her a hero to us. Elaine's full-time acting gig never keeps her away from her true passion: animal advocacy.

From ending the cruel use of fur, to keeping elephants out of circuses, to finding homes for the millions of shelter pets who would otherwise be euthanized, Elaine does it all. Now she's joining the Animal Legal Defense Fund (ALDF), the nation's leading legal advocacy organization for animals, on a Public Service Announcement (PSA) campaign to expose the tragedy of puppy mills. 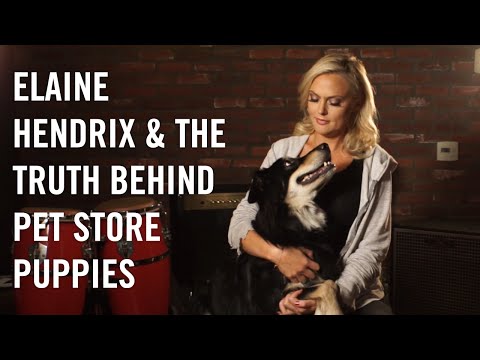 Some celebrities dip their toes into activism, but Elaine Hendrix lives the cause. She attends animal protection conferences, hits the street for protests, and uses her notoriety as a way to reach even more people with the message of justice that is so important to her.

Helping animals has been Elaine's driving force for over a decade. Everything fell into place for her after what she calls the "fortunate mistake" of watching an undercover fur industry video. She had always been an animal lover, and was already a vegetarian, but like so many people she didn't fully realize what was really happening to animals--what goes into a fur coat, a leather bag, a circus act, a carton of milk. Elaine was changed forever. From that moment on she became a full time animal advocate on top of her acting career.

Elaine leads a double life as actress and activist, and she makes a notable impact in both fields. She's racked up honors for her exceptional acting and her commitment to animals. Elaine even founded her own nonprofit, The Pet Matchmaker, which supports rescue, foster, and adoption. Her rescue dogs Ellie and Bixby and rescue cats Kimbo and Goodie Cornbread are a daily reminder that adoption saves lives.

Elaine's powerful new PSA for ALDF could be the life changing "fortunate mistake" for viewers who never knew that buying a puppy at a pet store supports a multi-million dollar industry of cruelty.

Learn more and how you can help!