The life of an egg-laying chicken in the U.S., or one of 301 million others like her, normally lasts 12 to 18 months, during which she produces up to 450 eggs. But what happens after that, when she's no longer considered profitable by the egg industry?

According to a new investigation, the life of a "spent" bird - the industry's term for a hen who's no longer used for her eggs - is short and not so sweet. While the vast majority of spent hens are killed on the site of the actual farm, a small portion are instead sent to slaughter facilities where they can be turned into low-grade meat for pet food or human consumption.

An undercover investigator spent 57 days working at one of these facilities, Butterfield Foods Co. in Butterfield, Minn., filming workers receiving thousands of birds from open-air transportation trucks and hanging them by their feet on metal hooks. The birds are then passed by a machine meant to cut their throats before entering a "scalding tank" that removes their feathers. But, as the investigator witnessed, many birds miss the knife and enter the tank alive and fully conscious. When this happens, these so-called "red birds" turn bright pink, because their blood is still inside their bodies. The investigator documented 45 of these red birds in a half-hour period.

The footage, compiled by The Humane Society of the United States (HSUS), is the first investigation inside a spent hen facility like Butterfield. 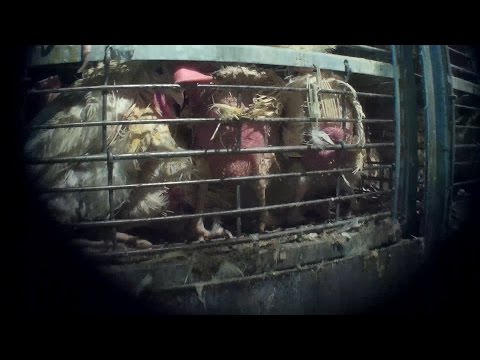 Butterfield Foods slaughters 85,000 chickens each day, five days a week. The meat is processed and used for animal feed and even canned for humans to eat.

The animal welfare standards in these facilities, the investigation reveals, may be lagging behind the rest of the poultry production industry, which has been slowly but gradually increasing its standards in recent years. While California recently passed a law to increase the area allotted to its egg-laying hens, Paul Shapiro, HSUS vice president of farm animal protection, said that spent hen facilities have abysmal animal welfare standards in comparison.

"Perhaps most horrifying is that birds are scalded alive," Shapiro told the media during a conference call on Monday. "It's clear that there just wasn't a concern on the part of the company for these issues of animal welfare."

HSUS filed a complaint with the local sheriff's office in Butterfield, Minn., alleging that the facility violated state anti-cruelty laws. It also filed a complaint with the USDA's Food Safety and Inspection Service. The organization says that USDA inspectors at Butterfield Foods were not present in the areas preslaughter, like the killing floor and the scalding tank, meaning that they did not document or count the number of red birds. In the video, many of these birds are thrown into a bucket and disposed of before they reach USDA inspectors in processing rooms - meaning that the USDA doesn't keep track of how many birds are scalded alive.

Improving animal welfare for chickens is tricky. Though they comprise nine out of 10 of the animals slaughtered for food in the U.S., chickens are entirely exempt from the Humane Methods of Livestock Slaughter Act, which requires that livestock be rendered insensible to pain before slaughter.

But there are more humane methods to slaughter chickens - ones that render animals unconscious before they are slaughtered. Shapiro pointed to a technique called controlled atmosphere stunning, or CAS, a process that involves removing oxygen from the birds' atmosphere to put them to sleep before they are slaughtered. According to the USDA, "The general consensus among many researchers in the United States, the European Union (EU), and Japan is that CAS is more humane than the current method of electrical stunning."

Butterfield Foods Co. did not immediately respond to The Dodo's request for comment.