For the first time since opening its doors 45 years ago, a hospital in Brazil decided to make an exception to its "no pets" policy - fulfilling a patient's dying wish to bid her dog one last farewell.

Since being admitted to the University Hospital of Santa Maria in December, 80-year-old Teresinha Prieto Flores had been without her constant companion of eight years, a fluffy white dog named Pink. Although she was only semi-lucid in her final weeks, Flores made daily requests to see her beloved pet. Health-care workers were so moved, they successfully appealed to have the rules bent to allow for a visit from Pink.

Last week, with the unprecedented authorization from hospital administrators, Flores and her dog were finally reunited. 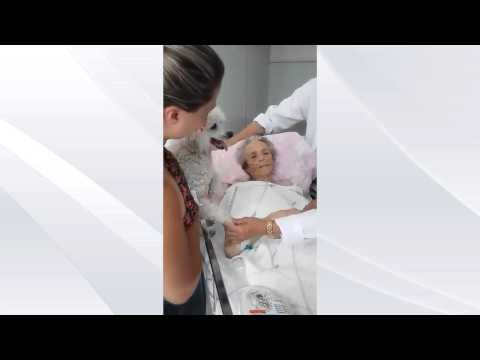 "It was a farewell and the realization of her final dream, to give that kiss to Pink," family friend Jéssica Stello told newspaper Diaro de Santa Maria.

Sadly, Flores passed away just days later, though the legacy from her farewell to Pink may have a lasting effect. The hospital's head of medicine says that, given the bond between people and their pets, future visits like this one shouldn't only be allowed - they should be encouraged.