During a recent walk through an animal market in the United Arab Emirates, veterinarian Piotr Jaworski was shocked by what what he saw: neon-colored rabbits who had been dunked in buckets of toxic dye for sale as Easter playthings.

"It is absolutely unacceptable," Jaworski told Abu Dhabi newspaper The National, calling the practice a "cruel gimmick." "In my opinion the process and existence of this dye on their bodies is detrimental to their health."

The Middle East Animal Foundation shared the photos as a way of highlighting the notoriously cruel Sharjah Animal Market, but the same misguided holiday cheer leads to plenty of animal suffering much closer to home.

In America, thousands of baby chicks and rabbits purchased as Easter gifts are abandoned each year after their (often young) owners lose interest in the living novelties, according to the ASPCA.

For the chicks, this frequently involves a bizarre practice in which the animals are dyed bright colors by injecting their eggs with food coloring days before before they hatch.

"You take regular food coloring and inject it into the egg on the 18th day of incubation," retired poultry rancher Peter R. Theer explained to The New York Times. "Put a little dab of wax on top to cover the hole up, and put it back in the incubator. It doesn't hurt them, because the food coloring is perfectly safe."

But even if the dye is as harmless as Theer claims, the eye-catching chicks are eventually dumped by the dozens when they lose their baby feathers and grow into regular, un-tinted birds.

"Humane societies are overflowing with these animals after Easter every year," Don Anthony of the Animal Rights Foundation of Floridatold The New York Times. 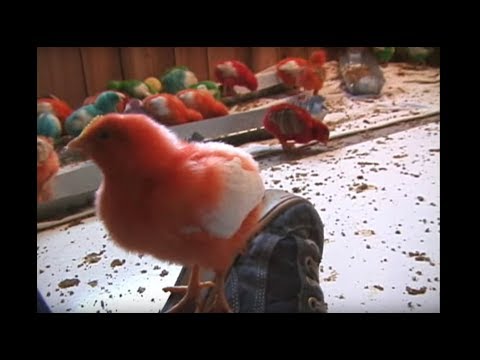 Fortunately, around half the states now have laws banning the dyeing of animals and cities like New York and Los Angeles no longer allow the sale of rabbits in pet stores at all.

If you're considering buying a rabbit or chicken for your child this year, the ASPCA recommends giving them candy instead. If, however, you think you're truly ready for the commitment of bringing an animal into your life, adopt, don't shop.