When Duffy was discovered in a dark, cave-like room, he could scarcely wag his tail.

His fur was severely matted. His backside, encrusted with feces. His legs too weak to stand on.

"Oh god," Ashley Mauceri of the Humane Society of the United States (HSUS) could be heard murmuring in a video posted to YouTube.

But the 8-year-old Great Pyrenees mix did manage to make one hopeful gesture to the woman who rescued him.

He laid his paw on her hand.

It was her second conviction.

"Arkansas is one of the most problematic puppy mill states in the country since there are no state laws to protect dogs in commercial breeding facilities," Melanie Kahn of the HSUS Puppy Mills Campaign stated in a press release.

As for Duffy, he made the most of his new leash on life.

He learned to walk again.

He learned to love.

He found a real home.

And finally, he was reunited with the woman who rescued him.

Among the first things Duffy did?

He laid his paw on her hand.

If you would like to help the Humane Society of the United States in its mission to end puppy mills, consider making a donation. 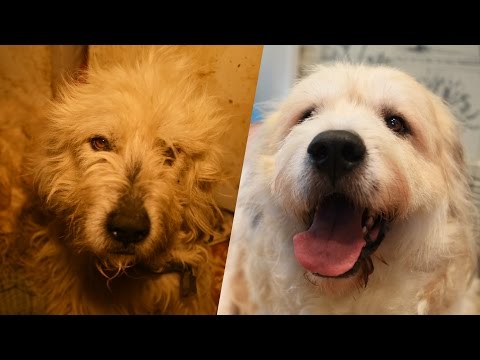