Dog And Cat Fur Could Be The Trim On Your Jacket

Do you know where the fur trim on your jacket comes from? Unbeknownst to most, the majority of fur-trimmed clothing and accessories (even trinkets and pet toys) labeled as "faux fur" or "synthetic" is likely real fur, mostly from cats and dogs. It is estimated that over two million domestic cats and dogs (the majority stolen pets and homeless strays) are killed in China every year for their fur, which is exported under false labeling to North America and Europe. There are no governing laws to protect animals, resulting in agonizing torment and death for these defenseless animals.

This largely unknown animal protection issue will be exposed in the groundbreaking film, "Cry of the Innocent: The Voices That Can't Speak" and brought into the international spotlight, with its center on the fur trade as a paradigm of a society in a perpetual state of disconnect.

Through the Director's strategic partnership with ACTAsia for Animals, the film's recent trailer focusing on the cat and dog fur trade, has made great strides throughout Asia with precedent-setting media coverage in China, the mecca of the fur farming industry. The trailer (below) was screened at a press conference in Shenzhen, China, attended by the national media, and has already had a tremendous influence, with precedent-setting TV news coverage of the cat and dog fur trade at its epicenter, showing clips from the new movie trailer. 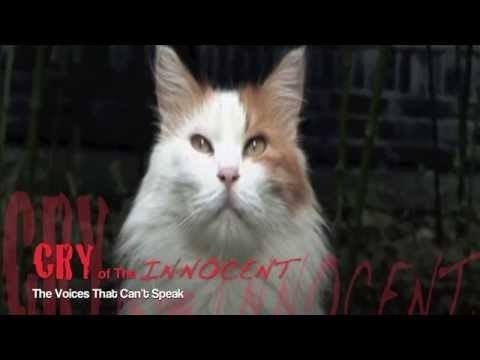 The fur trade is criminal, inflicting horrific torture upon more than 50 million fur-bearing animals every year, including man's best friend and feline companion, in the name of profit, vanity and self-aggrandizement. This figure does not include rabbits, which the UN reports to be at least one billion killed each year strictly for their fur.

This precedent-setting documentary is taking a spiritual approach to this dark subject, so that an awakening can occur from a deeper level of the psyche.

The power of film can move mountains. A case in point is Blackfish; its rippling effect has resulted in significant losses for SeaWorld, a prime example of the impact of film on real life. The film redefined our relationship with other sentient beings, relating to them with respect, which will have even more far-reaching effects.

As Cry of the Innocent's director Kathleen Lowson said, "It is clear that until the soul of humanity is awakened, the atrocities committed against non-human animals will continue with no end in sight. We cannot cure the disease unless we heal the source. Any lesser remedy is akin to applying a bandage to a severed limb. This film is a call to action for the billions of animals around the world who suffer and die tragically in silence, their cries for mercy unheard, hoping in their hearts that we will hear their pleas for life. There is power in the collective force. Together, in collaborative solidarity, we will bring truth to this shallow world devoid of soul, so our society can be healed and compassion toward animals will become a new paradigm of spiritual evolution on our planet."

This groundbreaking film is currently in production while raising funds.

For more info about the film and to donate, please visit the film's website here. Every donation counts, no amount is too small. If it is not possible to make a financial contribution but want to support this film, please share this post widely and help make it viral.