Dolphins And Humans Are Not So Dissimilar

Since the earliest days of recorded history, dolphins have been a source of wonder and mystery in cultures throughout the world -- considered in legend, perhaps more than any other animal, as having a unique bond with humankind.

In recent decades, scientists studying dolphin behavior, intelligence and genetics have actually come to confirm that there are indeed many commonalities between people and these ocean-going mammals.

Veterinarian David Busbee from Texas A&M University compared the human genome with that of dolphins and found that they were nearly identical.

"The extent of the genetic similarities came as a real surprise to us," says Busbee.

"We started looking at these and it became very obvious to us that every human chromosome had a corollary chromosome in the dolphin. We've found that the dolphin genome and the human genome basically are the same. It's just that there's a few chromosomal rearrangements that have changed the way the genetic material is put together."

But beyond genetics alone, the similarities between dolphins and humans is evident throughout the life-cycle -- from their parent-child relationship to the strong bonds they form with members of their social groups.

The development of dolphins in utero is similar to that of humans and other land mammals. Gestation times vary from species to species, but typically last between 10 to 17 months, usually leading to the birth of a single offspring -- though twins are not unheard of.

Like human mothers, dolphin take tremendous care with their calves. Once their young are born, the new mothers quickly sever the umbilical cord and push them to the surface to breath, often with the help of other females in the pod. Within minutes, newborn dolphins are able to swim and surface on their own, though they rarely leave their mothers' side.

Dolphins produce a thick, fatty milk, nursing calves for six months to two years, depending on the species. Calves will remain close with their mothers much longer, however, until reaching puberty at around 5 to 10 years old.

Growing up, young dolphins form close bonds with their pod as they practice the skills necessary for survival in the wild. Juveniles often engaged in games of chase, as they explore their habitat socialize with members of their group.

During this important period, older dolphins teach their younger counterparts skills and other learned behaviors -- making them one of the few animals other than humans to possess a culture. Researchers say that some pods of bottlenose dolphins have been observed demonstrating tool use to their calves, like in holding a sea sponge to protect their snout while foraging for food.

Likewise among humans, the knowledge acquired in these early formative years is critical for their survival, and with working collectively for the benefit of the whole.

Research suggests that, also like humans, dolphins possess a sense of self-awareness -- credited in part to their large, complex brains which bear striking similarities to ours.

Although it may be impossible to know for certain to how dolphin intelligence and consciousness compares with our own, numerous studies have found that they are capable of performing complex tasks and appear to recognize themselves as individuals.

"When you get up in the morning and look in the mirror and know that's you, you have a sense of 'you'. They have a similar sense. They can look in a mirror and say, 'Hey, that's me'."

Empirical proof of dolphin intelligence and consciousness may be hard to come by, but their interactions with us might offer the surest clues that while we may see differences between ourselves and them, they regard us closer to equals.

There have been numerous incidents wherein dolphins have intervened to help humans in distress at sea dating back to antiquity. More recently, there have been documented cases of dolphins helping to save drowning swimmers, and driving away sharks from attacking.

Some scientists speculate that dolphins may regard humans they encounter as equals because of their ability to literally see beyond the superficialities of our species. It is believed that dolphins' use of sonar allows them to ‘see' through soft tissue in humans and one another, where the basics of our anatomy are not vastly dissimilar. 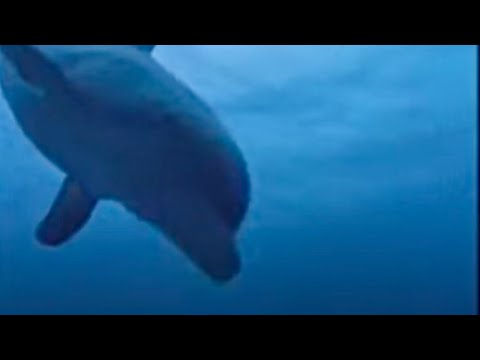 On average dolphins live to be around 25 to 30 years old, though some -- like the common bottlenose dolphin pictured above -- can live to be over 40.

Given the commonalities between humans and dolphins, more of which are discovered as research delves further into their behavior and cognition, conservationists have begun to call for dolphins to be granted the legal protections of personhood. Throughout the world, dolphins continue to be imperilled from human threats, like hunting, pollutions, and denied their freedom in captivity.

"A person needs to be an individual. If individuals count, then the deliberate killing of individuals of this sort is ethically the equivalent of deliberately killing a human being," says Ethics expert Professor Tom White.

"We're saying the science has shown that individuality -- consciousness, self-awareness -- is no longer a unique human property."