Last week, the National Aquarium in Baltimore, Maryland, announced that it would be returning its captive dolphins to the ocean to live out their days in a sea pen sanctuary. But Arizona is taking a huge step backward with the construction of Dolphinaris Arizona, an entertainment park that will feature 12 captive dolphins in "interactive experiences" like swim with the dolphin (SWTD) opportunities.

"I think it's going to be a nightmare for the dolphins," Courtney Vail, campaigns and programs manager for Whale and Dolphin Conservation (WDC), told The Dodo. "You can climate control anything, and any prison cell can be adapted to enable these dolphins to survive, but it doesn't mean they will thrive."

Dolphinaris is a Mexico-based company with five locations. The Arizona facility will be the first in the United States. It will open next door to the OdySea Aquarium, also under construction, on the Salt River Pima-Maricopa Indian Community in Scottsdale in late summer 2016 - regardless of growing public opposition to places like SeaWorld.

The park will offer "an opportunity for visitors to interact with dolphins, learn about this amazing species, and be part of ocean conservation efforts," according to the Dolphinaris website.

But members of the public - and countless animal welfare groups - aren't buying it.

Last month, more than 200 people gathered at a protest against Dolphinaris that was organized by Empty the Tanks. One of those protesters was Anna Kiley, a former dolphin trainer at SeaWorld San Diego.

"I am horrified that Dolphinaris is bringing dolphins to Arizona," Kiley told The Dodo. "Our climate here is extreme - 115-plus degrees in the summer and below freezing temperatures in the winter, pollution from the freeway, dust storms and monsoon thunderstorms, dry air, etc."

Dr. Heather Rally, a marine mammal veterinarian who currently works with the PETA Foundation, echoed Kiley's concerns. She told The Dodo it's increasingly apparent that captive dolphin programs take an immense toll on the health and happiness of the animals involved.

"What we have learned over decades of keeping these animals in captivity is that we cannot meet their needs in concrete tanks," Rally said. "This includes wild-caught and captive-born animals who all have the same basic and genetically ingrained needs."

Grey Stafford, general manager of Dolphinaris, declined to comment. The company instead sent a fact sheet to The Dodo describing Dolphinaris as "a multinational and multicultural endeavor bringing jobs and a family friendly attraction to the Valley."

Rally said it's particularly concerning that the dolphins will be kept in the Arizona desert, one of the warmest and sunniest places on the planet, which poses a unique set of challenges.

Though the facility would regulate the water temperature of the dolphin pools, it is unclear if it has plans to provide adequate shade and protection from harmful UV radiation, according to Rally. "Unless adequate shade is provided, these dolphins will be confined to very shallow pools in unnaturally clear water, exposing them to the damaging sun every day with nowhere to hide," she said.

While wild whales and dolphins spend much of their time diving, which shields them from the sun, captive cetaceans often can't escape UV radiation in their small pools. Orcas at SeaWorld, for example, have been spotted with severe sunburn.

A hot desert environment also poses great risks to dolphins, including respiratory infections due to the excessive dust. Valley fever can be contracted by marine mammals as well as humans and other animals, according to Vail.

Rally said Arizona is home to an array of land pathogens to which dolphins are susceptible, especially fungal pathogens found in the soil. When it is windy those spores easily can be picked up and suspended over the pools. "Dolphins have a unique respiratory physiology, which makes them particularly susceptible to fungal pneumonia," she said.

Of course, there are also the usual problems with keeping dolphins in tanks. Dolphins become bored in captivity where they are inhibited from engaging in some of their most basic natural behaviors, according to Rally. They are housed in tanks that are a fraction of the size of their natural range, often in incompatible social groups.

This causes undue stress and results in the development of abnormal behaviors and increased aggression toward other dolphins, all of which can be extremely detrimental to their overall health and the health of the group.

As a result, dolphins in captivity often die well before their life expectancy in the wild, Rally said.

And SWTD programs just add to that stress, Rally said. Dolphins often become increasingly agitated when in the water with humans, which often leads to behavioral issues that can include aggression. These programs have resulted in numerous incidences of injury to people ranging from scrapes and abrasions to broken bones. There is also an increased likelihood of the transfer of zoonotic diseases. "From the standpoints of animal health and welfare, to public health and safety issues, there's no reason why this should be legal," Rally said.

And because SWTD regulations were suspended in 1999 under the Animal Welfare Act, there has been no required reporting on accidents occurring between captive dolphins, or between dolphins and humans, for the past 15 years, according to Vail. But there have been serious incidents that include dolphins colliding and dying at a program in SeaWorld's Discovery Cove park in Florida during SWTD interactions. In other instances, dolphins have jumped out of pools, while others have died from ingesting foreign objects, said Vail, who cited media reports and the federal Marine Mammal Inventory reports.

There are roughly 622 captive whales and dolphins in the U.S. and Canada as of April 20, 2016, according to Ceta-Base. Of those, 480 are bottlenose dolphins. But the Dolphinaris planned opening comes at a time when similar institutions are looking to reduce that number, not increase it - whether through ending breeding or eliminating programs altogether.

"Enlightened public attitudes are trending away from exploitation of captive dolphins and whales for our entertainment," Vail said. "Quite simply, these free-ranging, sentient, intelligent mammals deserve better from us."

"They are highly evolved, intelligent, social animals," Rally said. "They have complex emotional lives. Thanks to the work of Dr. Lori Marino, we know that their brains appear to be even more developed in certain regions that are associated with memory, social awareness and the capability for experiencing emotion."

But all of those attributes are stifled in the close confines of a concrete tank, where dolphins of different cultural backgrounds are often thrown together.

"As top predators in their environment, wild dolphins hunt cooperatively as a group, which requires complex communication, social bonds and the ability to see and navigate superbly in the ocean environment," Rally added. "They live in pods consisting of several individuals and ranging to over 100 individuals for some species, and they will often travel together over vast distances. All of those things, from their complex natural history to their cognitive capabilities, make it far more difficult to provide for their welfare in captivity."

They even have unique identifying calls assigned to each individual that are similar to human names, in addition to the unique languages and dialects that different pods share, Rally said. They also form very strong emotional bonds with one another and have intimate social lives.

But none of that seems to matter to Dolphinaris, which appears determined to go ahead with its plans for the interactive program, which Vail called "regressive."

"We can rationalize the captivity of these magnificent creatures because of our selfish desire to be close to them, which is really what's going on here," Vail said. "But actually there's great risk for the dolphins and for the humans."

"The public has not seen the big picture and are not able to see the suffering, how they are actually doing behind the scenes, the infections or the injuries," she added. "That's our job - to share the true backstory."

Want to help stop Dolphinaris? You can sign a petition here.

Watch a dangerous encounter during a SWTD program: 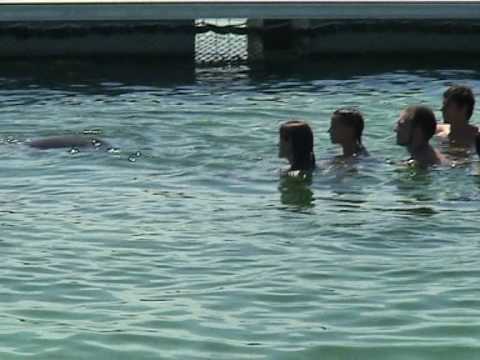