A dolphin at SeaWorld San Antonio bit the hand of a 9-year-old girl earlier this week, prompting PETA to send a request to the U.S. Department of Agriculture (USDA) asking the agency to investigate the incident. The dolphin, which was part of the park's Dolphin Cove, where guests are invited to pet the animals, reportedly latched onto the girl's hand on Feb. 22 so hard that her mother couldn't pry that animal off, and a park employee had to intervene.

In a release, PETA said that it was asking the USDA to hold SeaWorld accountable for violating the Animal Welfare Act by endangering the dolphin and the child.

"It's stressful enough for far-ranging dolphins to be locked up in SeaWorld's tiny tanks, but forcing them to interact with visitors is downright dangerous," says general counsel to PETA Jeff Kerr.

In the wild, dolphins can swim at speeds of up to 25 miles per hour and travel as far as 100 miles in a day. But at SeaWorld, these highly intelligent social animals are confined to tiny, barren concrete tanks-a physically and psychologically damaging environment.

This is not the first time the amusement park has experienced an incident like this -- in 2012, a dolphin bit a girl on the hand at SeaWorld's park in Orlando, Florida. 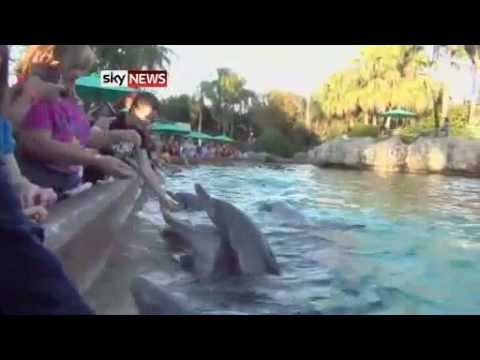