These two dogs gave each other comfort in the midst of the most horrifying circumstance: life in a Korean dog meat farm.

Cedric and Mendy, as they'd later be named, were found on the meat farm earlier this year living in a crowded kennel where their owners didn't even provide them with regular water. They shared a cage hardly big enough for the two of them, side by side with dozens of other caged dogs.

When rescuers arrived, the friends jumped up on their cage to greet the team. Compared to the other 169 dogs at the farm, these two stood out as particularly sociable.

That made the job of preparing the two for life as pets much easier for Rebecca Burton, vice president of direct animal care & lifesaving partnerships at St. Hubert's Animal Welfare Center in New Jersey.

"We don't know how they came to be at the farm in Korea - whether they may have been somebody's previous pets or whether they were bred right on the farm," Burton told The Dodo. "Because they are extremely social with people, that helped them adjust a little easier when they got to us."

When the two arrived at St. Hubert's last Tuesday, the staff immediately realized that the pair had a special bond.

"They were flown in separate crates, and then when we reintroduced them to each other, they were so happy to see each other," Burton said. "They were jumping all over each other - pure joy."

"And she looks to him for support," she added. "She's a little quieter of the two."

Cedric and Mendy are lucky to have each other during their transitions. For many of the dogs, the rescue is a time of uncertainty and fear.

But even the most frightened dogs can make progress. "This dog, Karma, broke my heart," Burton said. "She just sat there with her head down like, 'Go ahead, do what you want with me.' But today, she's up in the kennel wagging her tail, barking, eating."

"I think they will learn to trust people very easily," she added of the other dogs.

More dogs are still on the way from this rescue, with around 12 to 16 dogs arriving from South Korea at a time.

After all the dogs arrive, St. Huberts will keep about 20 to 30 of them on site, but most of the dogs will be relocated to new homes.

In the short time that Cedric and Mendy have been at the rescue center, they've received medical treatment, including being spayed and neutered, learned to play with other dogs and gone on walks with volunteers and staff members.

Now, they're ready to be adopted, and, when asked if Cedric and Mendy will be leaving the center together, Burton responded, "Totally together! Cannot/would not separate those two!"

"They're very bonded, and that's why we're keeping them together," she added.

St. Hubert's Animal Welfare Center is located in Madison, New Jersey, and is open to visitors and prospective parents seven days a week. For more information on how to visit the shelter, visit its website.

Watch the full video of Cedric and Mendy's story below. 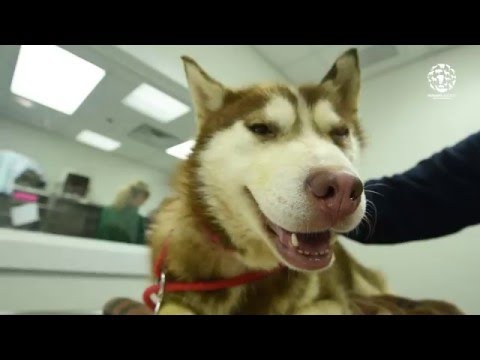