Dogs Join Fight To Save Rhinos From Poaching

Rangers at the Ol Pejeta Conservancy in Kenya have enlisted new members for the anti-poaching team -- a group of dogs trained by local villagers to sniff out poachers. The dogs smell and search out carcasses, leading the rangers to the site. Then, they can track the intruders and attack a running suspect, if the rangers can't apprehend them.

When he arrived in Africa in August 2013, his new team consisted of three blood hounds and an assault dog named Tarzan. Within a few short months the team had not only expanded with a new kennel block and a dog agility arena, but grown to include the children of Tarzan, eleven Belgian Malanois puppies.

"They're very agile, they're very tenacious, but they're intelligent as well," Pleasants said. "Why we use these dogs is because of the fact that they are fully approachable."

Wearing ballistic body armour, the dogs are able to strategize and run in an indirect line to target the poachers, unlike a stun gun or bullet. They also do the latest FIDO head gear -- a piece of camera equipment on their heads with night vision and a GPS system.

You can see the anti-poaching pups in action here: 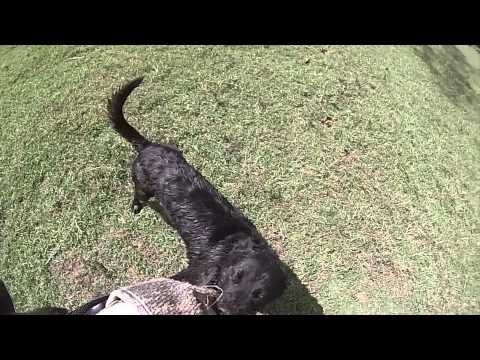